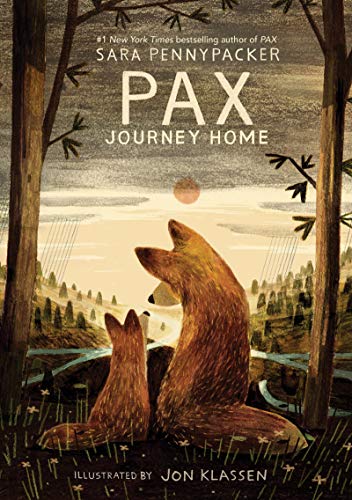 “Pennypacker brilliantly walks this tightrope of evoking the power and pain of love. The end result is a story about healing and forgiveness . . .”

Sara Pennypacker achieves an impressive feat here, making this tender sequel to her bestselling Pax just as powerful as the first book, maybe even more so. Readers don’t have to be familiar with the first book as Pennypacker does a subtle job of providing just the right amount of backstory to put this new book firmly in context.

Chapters alternate between the fox’s (Pax’s) and the boy’s (Peter’s) point of view, each storyline compelling in its own right until the two stories join into one as the characters reunite after a year apart.

Both Pax and Peter have worked hard to heal themselves. Pax has a new family with the vixen Bristle and their young kits. Peter has joined a group called the Water Warriors, young people working to fix the landscape left ravaged by war, purifying streams and lakes made toxic by humans.

Peter has worked hard to shut out any connections that might evoke love, hardening his heart to protect himself against any more loss. Pax has done the opposite, finding himself surprised by the depth and immediacy of his bond with the kits. Pennypacker’s writing is especially luminous as she describes this parental love, the overwhelming force of it. Here’s Pax when he first sees the new litter:

“Pax dropped to the floor and curled himself around his family. Three tiny hearts beat into his own. “Safe Ours.”

“The little fluff of gray on his chest was nearly weightless, but he felt pinned to the ground as if the boulder beside him had rolled.

“Whatever this kit needed, he would provide.”

Peter has the opposite reaction, shying away from any hint of love, seeing it not as a strength but a great danger:

“He suddenly realized that everything here—Vola, the cabin he was building, the town he was coming to know, his grandfather, Ben and the others—everything here was too dangerous.”

Pennypacker brilliantly walks this tightrope of evoking the power and pain of love. The end result is a story about healing and forgiveness: healing from war, from poisons in the environment, from pain and loss, from the ways people disappoint those they love. Both the fox and the boy are on separate journeys, which come together in the most satisfying way. Home, community, family, and love are all themes that resonate strongly, and the reader closes the last page hoping a third book will be written so that we can see how these characters continue to grow. For those who haven’t read the first book, reading this one will send them back to the beginning of the story, eager to be part of Pax’s and Peter’s lives again.