Pax Ethnica: Where and How Diversity Succeeds 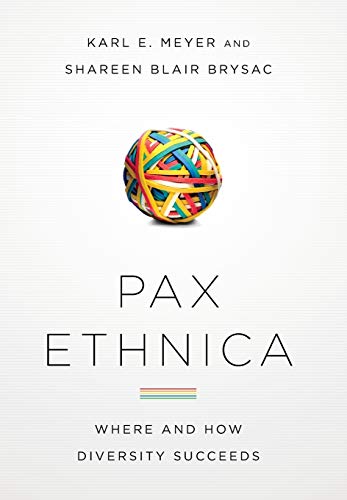 “. . . there can be no universal recipe for establishing oases of multicultural peace throughout every nook and cranny of our shrinking globe. And the items in the authors’ list are quite uneven; ranging from the substantial to the peripheral. Nonetheless, it can be hoped that policymakers seized with issues of multicultural collaboration will give the recommendations in Pax Ethnica serious consideration—rather than dismissing them as nothing more than academic wishful thinking.”

As might be expected from authors who embody scholarly expertise and journalistic style, Karl E. Meyer and Shareen Blair Brysac have written a book jam-packed with little known and interesting information that provides many passages likely to provoke “Aha!” insights for its readers. And best of all, Pax Ethnica: Where and How Diversity Succeeds is a joy to read.

In the pages of Pax Ethnica: Where and How Diversity Succeeds, the authors argue that the conventional storyline of “domestic contention” and “clashes of civilization” throughout the Balkans, the Middle East, central and south America, south and southeast Asia, and “historically victimized Africa” grossly distort our perception of the actual reality.

Instead, they set out to demonstrate that many people who belong to quite different cultures and sociopolitical or ethnic subgroups do live peacefully together in the same space; i.e., that “multiple loyalties and languages can be creatively reconciled.”

They illustrate that proposition by retracing the historical evolution of the diverse populations living within five specific “oases of civility”—Flensburg (Germany); Kerala (India); Tatarstan (Russia); Marseille (France); and the New York borough of Queens (USA)—with a chapter devoted to each of those case studies.

A sixth chapter focuses primarily on the Canadian, Australian, and—with apologies to the United States’ other western hemisphere neighbors—“American” experience. With the exception of the discussion of Australia’s relatively unique inter-ethnic history and the reminder that it was not until “the 1960s . . . [that] all three countries lowered racial barriers” to immigration, the discussion in this sixth chapter covers ground likely to be familiar to most American readers.

A reading of this book suggests that some combination of political and administrative decentralization, respect for culturally legitimate—even if unofficial—methods of resolving conflict, the existence of a common language (even if other second or third languages are also used by subgroups), and some exposure to international trade and traders tend toward the lessening of inter-ethnic strife.

Conversely, the existence of sovereign-state borders that separate the national homelands of specific ethnic groups or concentrate such groups within states dominated by other self-interested nationalities, the absence of mutually understandable languages, the “allure of the flag” as a symbol of exclusive—rather than inclusive—nationalism, and the exhortation of narrowly xenophobic political leaders tend toward exacerbating interethnic strife.

Some readers might view this book as begging a fundamental question: Can specific acts of human volition spark a transition away from potential or current interethnic conflict or are such transitions essentially a function of broader evolutionary processes that occur serendipitously.

The authors anticipate that concern by concluding this book with “eleven guidelines for promoting civility in diverse societies” that are summarized only briefly here:

“One. Wherever feasible, choose peace rather than land, since the pains of partition and/or occupation invariably exceed the gains. . . .

“Two. Take time to make the case . . . for diversity and do not leave unanswered stereotyped caricatures of currently unpopular minorities. . . .

“Three. Do not abjure the second passport or demonize hyphenated citizenship. . . .

“Four. Fear not the persistence of minority tongues. . . .

“Five. In constructing homes for new immigrants, horizontal appears to be more successful than vertical . . . ; [high rise apartments for immigrants have] turned into hives of ethnic alienation. . . .

“Six. Do not underestimate the power of professional, parental, and civic associations [a proposition that harkens back to Robert Putnam’s 1994 book Making Democracy Work: Civic Traditions in Modern Italy and the substantial literature that followed]. . . .

“Seven. Use public libraries to give immigrant newcomers a welcoming space where not only books but DVDs are available in their mother tongue. . . .

“Nine. Celebrate difference of creed and culture with a calendar that records the major religious festivals and national holidays of diverse minorities. . . .

“Eleven. Do not underestimate the allure of popular culture, rap music, or sports to diminish class differences and foster a society in which someone named Barack Hussein Obama can rise to the political summit.”

One should acknowledge here that there can be no universal recipe for establishing oases of multicultural peace throughout every nook and cranny of our shrinking globe. And the items in the authors’ list are quite uneven; ranging from the substantial to the peripheral. Nonetheless, it can be hoped that policymakers seized with issues of multicultural collaboration will give the recommendations in Pax Ethnica serious consideration—rather than dismissing them as nothing more than academic wishful thinking.