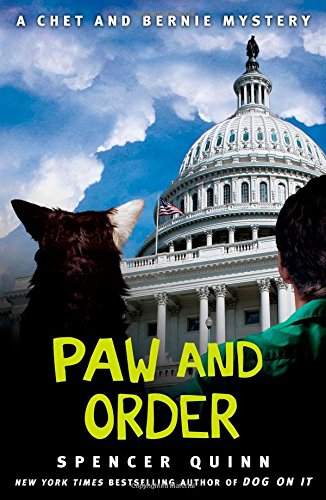 "Bernie gazed into his glass, swirled the bourbon around. I had the craziest thought of my life: he'd jump right in that glass if he could."

After Bernie Little and his constant canine companion (and series narrator) Chet solve their latest case in New Orleans, they have to make a decision. Take a left turn and to go west, which is home or go north to visit Bernie’s girlfriend, Suzie Sanchez, who’s now living in Washington, DC? North wins. Chet usually likes Suzie, until he remembers that when Suzie rides in the Porsche, Chet is relegated to the back shelf. That’s a little space for a big dog.

It isn’t long before Chet and Bernie get caught up in some kind of conspiracy.

In DC we meet people who knew Bernie when he was in the army and find out he was in the battle of Fallujah. Bernie doesn’t talk about that part of his life, but a general who may run for president keeps bringing it up. The general wants to know if he is this is the same Bernie Little that pitched for Army in a blizzard? Yes, sir it is, but as Chet often says, no time to go into that now.

The problems with setting this adventure in Washington are many. Bernie and Chet have caught their fair share of bad guys: “lots of perps breaking rocks in the hot sun due to the Little detective agency.” But in DC, the stakes are higher, so the crimes take on a sinister, rather than good-old-boy tone. This spoils a good deal of the joyful tone Spencer Quinn masterfully manufactures. Lots of people set their books in DC. Quinn is special, it’s a letdown to set the book here. Chet’s animal counterparts in this series are notable adversaries, but in this book can the reader really take Barnum, the guinea pig, as a worthy foe?

As usual Chet is both a step ahead and a step behind. Several times Chet tries to get Bernie to notice a bird with red eyes that keeps showing up in the oddest places, but unfortunately Bernie, like most humans, never seems to catch on to what Chet tries to tell him. What with the not noticing and lack of smell it’s a wonder that human beings got as far as they have.