Paula Rego: The Art of Story 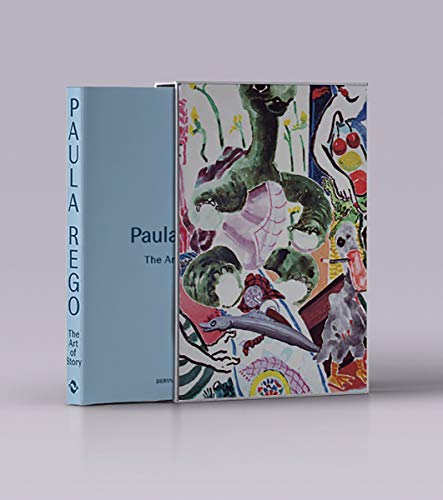 Paula Rego: The Art of Story is an extensive monograph covering the breadth of a 60-year artistic career which, for all intents and purposes, could be summed up in one word: intense. This is not a pretty little picture of a sweet and gentle surface level female artist. This is the gnashing out of the nitty gritty of unconscionable subject matters in a sometimes hard to swallow pictorial style that’s more likely to be found in a hard-core emotionally charged underground political debate than featured as non-controversial over-the-fireplace coordinated room decor.

Think Francis Bacon (1909–1992), think Lucian Freud (1922–2011), think John Dubuffet (1901–1985), think Chaim Soutine (1893–1943)—all influential contemporaries for Rego (b. 1935) who was born in Portugal but split time in Britain; think feisty clever female in the male-dominated realm of images. Images that are not afraid to remove the sugar-coating off of humanity and reveal the bare, ugly truths. These deeply moved souls, Rego included, couldn’t help but pour out their sentiments over the cold realities in play all around them. There is wonder, gall, sarcasm, raging incense bound up together and mashed into a challenge to finally decide that certain behaviors are unacceptable, and maybe be moved to do something to affect even an ounce of positive change.

The “Story” of the title, The Art of Story, is such that the telling of it will reveal much more than one ever expected to be exposed to. It’s a tending to the story behind the story. Like in fairy tales, myths, fables, where multiple levels of meaning run along several narrative currents, Rego’s storytelling is dagger sharp, raw, and cutting. No fluff. No naiveté. It is mind-boggling how her artwork was never banned!

“Each story from her life—of childhood, emerging sexuality, abortion, pregnancy, marriage—offers a flash-point in an evolving exploration of the complex mesh of forces that constitute what it means to be a woman in the world. Fearless, but always playful and generous, these are Rego’s uncompromising testimonies to the pain, as well as the joy and comedy, of being alive.”

Rego’s artwork is not for the faint of heart or the ignorant in spirit. But yet there is a huge juxtaposition in her oeuvre. While not shying away from topics of rape, bondage, domestic violence, power structures, social inequalities, gender ambiguity, and female genital mutilation, Rego’s career involved projects with Disney, cartooning, and children’s nursery rhyme illustration. This demonstrates astounding versatility and the clever ability to boil right down to the essence of the matter in any story.

Actually, reading through the commentaries about the nursery rhyme illustrations helps a non-native Portuguese reader understand her “adult” content a bit better. Lush with cultural references relative to the political era under which Rego was raised (the authoritarian Salazar regime), there are a surprising amount of analogies, extended metaphors, or parallels that can be extracted.

Rego pries out the immoral kernels hidden in society and puts them front and center where they can’t continue to be overlooked. Rees-Jones does a beautiful job articulating meaning where none seems to be present, and we sadly realize that there is so much wrong with mankind’s behaviors and the perpetrators aren’t always obvious.

A case-in-point Rego quote: “My favorite themes are power games and hierarchies. I always want to turn things on their heads, to upset the established order, to change heroines and idiots. If the story is ‘given’ I take liberties with it to make it conform to my own experiences, and to be outrageous . . .”

Instead of illustrating stories in the traditional sense, Rego focuses on moments of question. She is consistently and deliberately ambiguous with her readers/viewers much like René Magritte (1898–1967) was with his paintings of puzzling combinations and challenging perceptions. Rego is more interested in tensions and contrasts, than resolutions and indeed nothing is really resolved in any of her artwork, except maybe a prolonged and powerful sensation of discomfort or disgust.

With hundreds of full color reproductions of a wide range of artwork from 1951 to 2018, Paula Rego: The Art of Story is a hefty yet manageable read. Rees-Jones’ content is academic, but her voice is poetic, and she maintains a connection with the reader even through the challenging—intense—subject matter.