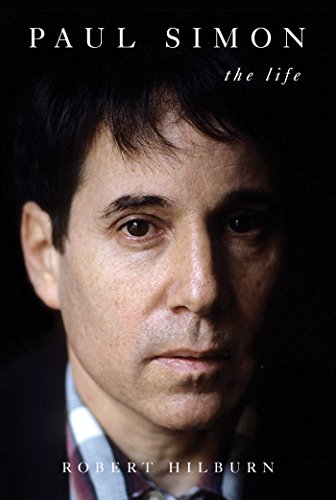 Paul Simon: The Life is not an autobiography but it might as well be. Simon sat for more than 100 hours of interviews with respected writer Robert Hilburn and made it possible for Hilburn to interview nearly everyone important in the singer's life. The result, happy to say, is the biography an artist like Paul Simon deserves; it takes its subject as seriously as Simon takes himself.

That's not a knock. God knows if anyone deserves plaudits as as one of the greatest songwriters of the 20th century, it's Paul Simon. He can go one on one with Dylan, Lennon and McCartney; you can name whomever you like. Not only has Simon written iconic song after iconic song, he did so while stretching and learning along the way. You need to take your craft seriously to produce this body of work and, luckily for all of us, Simon always did.

But back to the book. It is filled with more than enough anecdotes and factoids to please any fans. For example:

—It took 100 hours in recording studios for Simon to get the sound he wanted for "The Boxer" and part of capturing that explosive percussive sound was putting the drum kit inside an elevator shaft.

—Simon’s inspiration for "Bridge Over Troubled Waters" was an aside in a gospel record by the Swan Silvertones. At one point in the rambling record, the Reverend Claude Jeter, the lead singer, tosses off the phrase “I’ll be a bridge over deep water, if you trust in my name.” Years later, Simon met Jeter and a record producer who was there said, “Paul didn’t just thank him for his inspiration, he wrote him a check to show his appreciation—and I can tell you Jeter needed the money. After Paul left, Claude was so grateful that he cried.”

—Simon was upset as a young man by his physical appearance. He’s just slightly over five feet tall and even then, had thinning hair. “I know some people who don’t give a damn about their hair,” Simon said, “but I had these big rock ’n’ roll models: Elvis, the Beatles, Mick Jagger. They were all skinny and tall and they ha a lot of hair.” So focused was Simon on his hair that in a meeting with John Lennon—after Lennon quizzed him about music publishing rights—Simon asked Lennon who had taught him to comb his hair like a Beatle.

—Early in their careers, Art Garfunkel had a habit of hitchhiking to concerts and, in one memorable instance, nearly missed the sound check in Boston. That kind of behavior was only one instance of how Garfunkel drove Simon slightly mad over the years. To top it off, the couple who had picked Garfunkel up refused to believe such a famous singer would be hitchhiking. When Garfunkel offered to leave two tickets at the box office, the driver yelled, “Why don’t you grow up?”

Speaking of Art Garfunkel, he pops up repeatedly in the book, as you might imagine, and Hilburn does a great job of showing why Simon came to view his angel-voiced partner as one big pain in the ass. Garfunkel almost never stifles an ungenerous impulse.

There was the time the two of them performed at the Royal Albert Hall in London. Simon’s mother was in the audience and Garfunkel stood alone on stage singing “Bridge Over Troubled Water.” He got thunderous applause and took many bows as Simon waited in the wings to be acknowledged as THE GUY WHO WROTE THAT SONG. Eventually, Garfunkel introduced the piano player but never asked Simon to come out and take a bow.

Simon never forgot that. In fact, Simon doesn’t forget much. In an interview conducted in 2017, Simon recalled Simon & Garfunkel’s early days as Tom & Jerry, who were one-hit wonders with the song “Hey Schoolgirl.” “I remember during a photo session . . . something happened and Artie said, ‘No matter what happens, I’ll always be taller than you.’ Did that hurt? I guess it hurt enough for me to remember sixty years later,” Simon said. Ouch.

But the pair once were good friends. In one beguiling anecdote, Simon and Garfunkel are sitting in their old beat up car in Queens, still living at home, when “The Sound of Silence” comes on the radio, one of the biggest hits at the time. Garfunkel looks at Simon and says, “I bet those guys are having a great time.”

But despite the many stories about Garfunkel, this is a book very much about Paul Simon, and Hilburn carefully takes the reader through the various stages of Simon’s storied career, describing in detail how he came up with this or that song, from his days learning chords from his father and meeting that kid Artie from down the block in Forest Hills, Queens, to Simon’s early solo days in London.

The fact that Simon did succeed despite his personal demons—his size, his thinning hair and his erstwhile partner—is a testament to Simon’s overwhelming talent. He always sought to stretch himself when he could have effortlessly written catchy pop tunes like “Red Rubber Ball.”

Simon always wanted more. He even bucked the anti-apartheid movement at its zenith to travel into South Africa to record with some of the country's most glorious musicians. Despite making sure they were generously paid and credited for their work, Simon endured years of explaining himself even though his daring musical adventure produced the Graceland, one of his most soaring albums.

Simon, who is now on the verge of retiring from performing, says he will never stop writing songs. “I don’t really have a lot of choice about what it is I do because my mind keeps writing another song. That’s who I am, and if the work is valued in any way, that’s great . . . the public will always find the artists it needs,” he said. “I’m just an artist because that’s my personality trait, a characteristic of how my brain works . . . I make up songs, and I try to make them as interesting as possible. Stand back and just let me get on with it.”