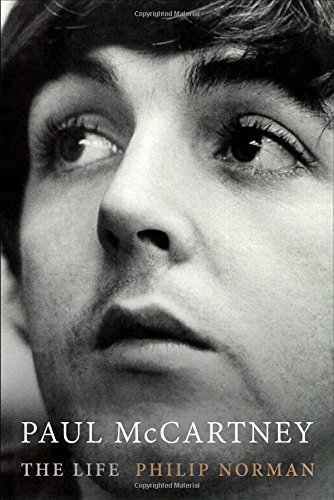 Writing an all-encompassing book about the life of Paul McCartney is akin to writing the definitive biography of Jesus Christ. The story is just so familiar that the major markers are well-trod ground.

Of course there’s so much more but even that’s been filled in many times over. There are books written about every day the Beatles were together and what they were doing or recording. There is an entire book about the day John met Paul.

But Philip Norman, who wrote Shout, one of the first major books on the Beatles and later a definitive bio of John Lennon, was not deterred, not even given the fact that Sir Paul had every reason to dislike Norman. Norman, in previous books and television appearances, went out of his way to praise John at Paul’s expense, even once saying that “John was ¾’s of the Beatles” which any sane fan—even if they favor Lennon--will tell you is just not true.

Despite all of that, Sir Paul gave Norman his tacit approval and allowed those in his inner circle to speak to the biographer if they wished. The result really is the definitive life story of Paul McCartney. It’s hard to imagine anyone will ever write another.

This bio has a ton of information about Sir Paul but, unfortunately, a lot of it has been discussed elsewhere. (Mark Lewisohn is only one-third of his way through the Beatles’ career). Norman’s book is for hardcore Beatles’ fans, those who want to search out the nuggets that can be found here.

Who knew for instance that Linda Eastman’s actual family name is Epstein, which gives her an eerie link to the man who introduced the Beatles to the world?

Who knew that the song “Yesterday”—considered by many the best pop song of all time and certainly the one covered more than any other—came to McCartney in a dream? (As an aside, the song “Satisfaction” came to Keith Richards in a dream as well, so it shows one should always keep a notebook handy near the bed.)

Speaking of “Yesterday,” it was thought be so out of the Beatles rocking orbit that it was never released as a single in the United Kingdom, was buried on the Help album, and did not appear in the film’s final cut.

Who knew that all four Beatles helped Paul write “Eleanor Rigby” with George kicking in the catch phrase “all the lonely people” which makes one wonder if George should have been given a writing credit?

There are tons more little factoids like this throughout Paul McCartney, The Life but that’s not really why one reads a biography is it? We want to know what Sir Paul is really like, and Norman probably comes as close as anyone ever has or ever will.

McCartney comes off as a likable and lucky man who loved his wife Linda and his family, a songwriter who loved John Lennon, and a musical genius who can play any instrument and, as Norman points out, sometimes seems to be made more of music than flesh and blood. Cathy melodies flow through him in a way even he does not understand.

He just wants to write and perform interesting songs that make people happy and make the world a joyous place. His critics have a problem with that, saying that he often caves in too much to his syrupy side. The truth is that this man has written so many great songs—both in and out of the Beatles—that he virtually stands alone.

Norman’s book does its best work when it portrays Sir Paul not as a legend but as a man who can be as peevish and unreasonable as anyone else. After telling his beloved father’s second wife that he will never forget how she cared for him in his hour of need, Sir Paul later turns his back on her and her biological daughter who was adopted by Paul’s father.

When a writer convinces Linda to co-author her life story, Paul tells her in no uncertain terms that the family has room for only one star, and the book is scuttled.

But even with these stories, Sir Paul on the whole comes across as a caring man who stood by John’s first wife Cynthia Lennon and his son Julian when no other Beatle would and who has donated more money to charity than any other rock star ever. He even resurrected his old Liverpool school as a music academy, only to have city fathers turn around and honor John with The John Lennon Airport.

Sir Paul’s competition with John continues to this day, but there’s no doubt Paul misses John greatly and how they played off each other. Same with his longtime wife Linda who succumbed to breast cancer. The less said about Paul’s rebound marriage to Heather Mills, the better.

Norman’s well-researched book has delivered to Sir Paul the biography he deserves. It’s nowhere near as entertaining as Keith Richards’ autobiography Life, but that’s because Sir Paul is not as outrageous and Keith’s life is not as picked over.

The Beatles were a remarkable story that had to do with genius, the times and yes, luck, as Noman makes clear time and again. Their untouchable career is almost impossible to explain no matter how many try to. Philip Norman has done a workmanlike, efficient job and, had the story not been told so many times over, this biography would have been hailed as groundbreaking. As it stands, it is definitive but not surprising and, sadly, not necessary unless you are Sir Paul’s ultimate fan.