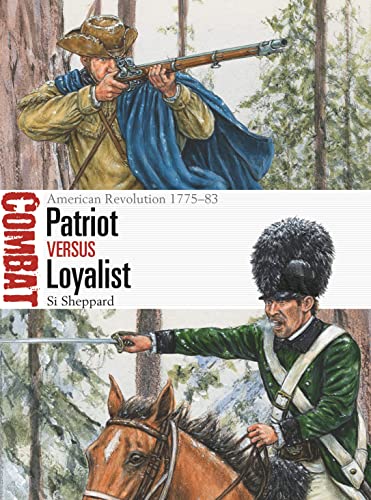 “In Patriot vs. Loyalist, Si Sheppard looks at this conflict of ‘communities, even families, sundered, of neighbor turning against neighbor.’”

Historian Holger Hoock wrote that South Carolina in 1780–1781 had one-fifth of all battle deaths and one-third of the wounded for the whole American Revolution but largely from Americans fighting their neighbors. This first American civil war also happened in many other places from Vermont to East Florida “ever escalating brutality of raid and counter raid, atrocity and reprisal.”

As much ethnic, political, and social history as military, covering everything on this subject in detail everywhere, including vigilante execution of prisoners, ethnic cleansing of civilians, African Americans, Native Americans as Americans, and the scars after the war would require a thick book. This small unit warfare was “decisive to the outcome of the war” but “was little recognized at the time and even less so now.” “From out of this maelstrom,” Si Sheppard continues, “emerged the United States of America.”

Despite claims in titles of various books to the contrary, this important topic remains unexplored in many ways. In Patriot vs. Loyalist, Si Sheppard looks at this conflict of “communities, even families, sundered, of neighbor turning against neighbor” in short histories of the fighting for Westminster County, Oriskany, and King’s Mountain. He writes in terms of the men and “weapons, dress, and equipment.” Each of the chapters includes chronologies, illustrations, maps, and concise analysis.

In this short but precise work for a general audience of military enthusiasts, Sheppard does include a solid summary of this warfare of fear that features a chronology and map of major clashes between Americans. The book does, at the least, touch on the major aspects including African American provincials, Native Americans, and more.

These American guerillas could even take on and defeat British regulars. Sheppard, however, does not touch on how the special soldiers also played important roles in the major fixed battles such as Cowpens. The author provides an essay on the aftermath of this American way of war. “The endemic nature of partisan warfare in the South poisoned the minds of the participants.”

Patriot vs. Loyalist is well-illustrated including detailed original color artwork by Adam Hook. The author includes a select bibliography and an index.