The Patricide of George Benjamin Hill: A Novel 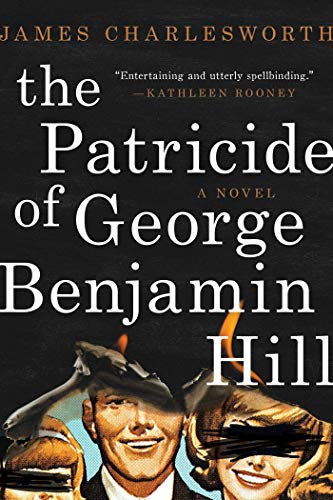 “For such an unabashedly polemical first novel, The Patricide of George Benjamin Hill works surprising well, due in large measure to the unremitting intensity of Charlesworth’s writing, the unsettling verisimilitude of its characters, and the moral courage at the core of its message.”

In Michael Chabon’s second collection of essays, Manhood for Amateurs, he recounts the story of a strange woman approaching him and his 20-month-old son in a grocery store, beaming in his direction, and saying, “You’re such a good dad. I can tell.” As far as Chabon could guess, the only thing he’d done to earn her admiration (besides simply being with his son) was not inflicting any readily apparent physical or emotional harm on the child while operating within this woman’s field of vision. All of which suggests a bar for “good dads” set abysmally low.

It’s both a cause and effect of the presumptive power of patriarchy that men get this sort of free pass as fathers, as if deficient or detrimental parenting were somehow congenitally gendered rather than conditioned and tacitly condoned.

James Charlesworth’s wrenching and often difficult-to-take first novel, The Patricide of George Benjamin Hill, takes dead aim at the prerogative of driven, ambitious men to ignore or demolish everything in their paths, their families first and foremost.

As unhappy a tale of the mangled lives of four haunted siblings as William Faulkner’s The Sound and the Fury, Patricide starts with a considerably shorter backstory that traces all the trouble to one man: the book’s eponymous patriarch, George Benjamin “Big Ben” Hill, a father “always with bigger fish to fry.”

Arriving in Depression-era California as young Dust Bowl refugee, Hill leaves his mother and four sisters dead on Route 66, loses his father shortly thereafter, and never looks back. After years of studiously ignoring his foster family, he marries a defeated and demoralized ex-beauty queen, and takes up residence in San Bernardino.

In his journey from dissatisfied grease truck driver to self-made millionaire, Hill borrows a few key plot points from the latter half of the 20th century in American entrepreneurship, bounding remorselessly from the country’s fastest-growing fast food empire to the Trans-Alaskan pipeline to grand-scale securities fraud.

Along the way Hill destroys one family by starting a secret second one. When his first wife confronts him over his indiscretions, Charlesworth writes, “He stood looking down at her, a man just turned thirty-two, refined by success and confident in his evasions. He gave her a look meant to display confusion, meant to convince without words that he had no idea what she was talking about.” She responds by attempting suicide in full view of her sons.

With his first wife mothballed in an asylum in the California desert, a few years later Hill uproots another family—a new wife, his second son, and two young twins—to a bleak cabin in Fairbanks for a promised six-month stint that drags on for seven years before this second family shatters and scatters.

The book’s real-time patricidal progression finds all four children approaching middle age in various manifestations of disarray and distress. We meet oldest son GB, his own family lost to him, his career in professional baseball long behind him, driving drunk up the eastern seaboard in a full New York Yankees uniform and spikes. His life has played out like a sort of inverse Archie “Moonlight” Graham, the at bat-less major leaguer who (as imagined by WP Kinsella in Shoeless Joe and the movie Field of Dreams) wrapped a wonderful life around one disappointing inning in the Show.

For reasons not altogether clear, GB has hit the road in search of his younger brother Jamie, whose shadowy life is coiled in the persona of the Snake, a deep-cover CIA operative carrying out some murky mission. How much of the nightmarish hellscape the Snake inhabits is real, and how much imagined, remains a mystery for much of the book—possibly too much.

Youngest son Max, an Alaskan bush pilot, states his mission from the start: He is going to kill his father, preferably with the assistance of all three siblings. He begins by tracking down his twin sister Maddie, a strung-out ex-showgirl living in squalor on the outskirts of Las Vegas.

What’s curious about George Benjamin Hill the family-wrecking monster is that he never strikes his children, or even verbally abuses them to a significant degree. The emotional violence that he passes onto and through his children stems from his utter indifference toward them, his sense of them as subordinates, and his unwavering understanding that the “family” attached to him has nothing to do with what he wants in life, and that he’d gladly run right over them to get it.

As Max reflects, “If their father had been a different man—a man who had wanted to help his children along rather than giving thanks when their own muddled decisions swept them out from under his feet,” perhaps they wouldn’t be on a mission to kill him.

For such an unabashedly polemical first novel, The Patricide of George Benjamin Hill works surprising well, due in large measure to the unremitting intensity of its prose, the unsettling verisimilitude of its characters, and the moral courage at the core of its message.