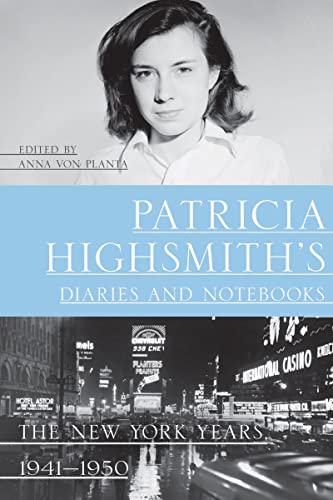 “Filled with stories and gossip, the book will have strong appeal for aspiring writers and readers interested in LGBTQ life in the 1940s.”

This is the other Patricia Highsmith.

Born in Fort Worth, Texas, Highsmith (1921–1995) was the author of some 20 novels, most notably Strangers on a Train (the basis for a celebrated Hitchcock movie) and The Talented Mr. Ripley, another made into a movie, both twisted works of psychological suspense.

At the height of her fame, she was best known as a caustic misanthrope—not a proponent of uplift.

In these engrossing pages, we meet her as a young, ambitious writer. At 20, she is (egad!) even optimistic, determined to conquer New York City in all its manifestations. She is bright, complex, and feels destined for greatness. She is studying at Barnard College, partying in Greenwich Village, and hanging out with successful, generally lesbian artists and journalists.

She has a bevy of lovers, mainly women, sometimes male, often several at a time. She is troubled enough by her own homosexuality that she seeks a “cure” from a psychiatrist, to no avail.

“My appetite is twofold: I hunger for love and for thought,” she writes. These revealing diary and notebook entries of her early years in 1940s New York record her quest. The pages detail her love affairs (she ranked her lovers), her reading (Kafka, Freud, etc.), her first attempts at fiction (“I want to write stories like H. James. He is my God!), and her gay bar hopping.

Tortured, given to depression, she nonetheless emerges on the whole as a cheerful young woman eager to get on with life. She writes, “To all the devils, lusts, passions, greeds, envies, loves, hates, strange desires, enemies ghostly and real, the army of memories, with which I do battle—may they never give me peace.”

And they never do.

Her diaries and notebooks consist of nearly 5,000 densely handwritten pages. The diaries recount meticulously her personal experiences. The notebook entries reflect on her writing.

It is difficult to imagine a finer account of coming of age as a writer in New York City and of gay life in the period.

Highsmith befriended a bewildering variety of the decade’s notables. They included Carson McCullers, Arthur Koestler, W.H. Auden, and Truman Capote (who recommended her for a 23-day stay at the Yaddo retreat, where Highsmith finished her first novel). It was at Yaddo where fellow resident Chester Himes tried to kiss her in his room.

By decade’s end she would publish her second novel, The Price of Salt, about a lesbian love affair with a happy ending. Later renamed Carol, and made into a movie, the book was published with care during the McCarthy period under the pen name Claire Morgan.

At the same time, she knew people like Mickey Spillane and Stan Lee from her day job working in comic publishing. The 1940s were a golden age of American comic books, and Highsmith was a scriptwriter in publishing house stables and then as a freelancer, turning out copy for biography comics about the lives of such luminaries as Oliver Cromwell, Dr. Livingstone, Galileo, and FDR. She also wrote war comics and Westerns and romances.

By 1950, a serious writer of fiction, Highsmith destroyed her records of her work in comics. It had paid her bills, and she drew on the experience to create characters in her fiction who worked in the comics industry.

In these same years, she took up a new hobby of collecting snails, studied drawing at the Art Students League of New York, and found herself implored by literary agents to lighten up in her short stories.

“If you could put a happy ending on this, Miss Highsmith, I think we could sell it,” said one agent. “Just the ghost of a happy ending. That little concession to commercialism shouldn’t ruin it. Just the merest touch.”

One story came back from The New Yorker with a note saying “Too unpleasant a subject—two people who become alcoholics.”

The problem, as she confessed in another entry, was her attraction to “the morbid, the cruel, the abnormal.”

The ambitious young novelist would build her entire career exploring those downbeat themes.

Filled with stories and gossip, the book will have strong appeal for aspiring writers and readers interested in LGBTQ life in the 1940s.