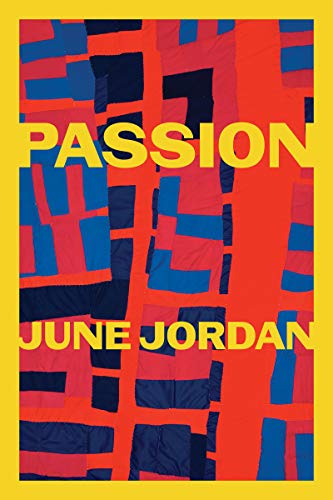 In her foreword to the new edition of Passion, June Jordan’s reissued classic of a book, poet Nicole Sealey writes: “About the politics inherent in her work, June Jordan once explained in an interview, ‘I don’t see where I can afford to be what I call trivial because these are not trivial times. . . . This is an apocalyptic moment in our history, American history.’ Jordan wrote like lives depended on it because they did. Because they do.”

Sealy is right. June Jordan was as political as she was detailed in her clairvoyance, so much so that it’s sometimes hard to say if it’s her foresight that makes her work feel so prescient to this day, or our own utter lack of progress as a people that lend her work its ongoing relevance.

We don’t wonder for long. Prescience aside, Jordan’s book is a feminist classic with value beyond current events, the title, Passion, apt for foreshadowing the intense and even loud chime of our age’s protests about all things unjust, there for decades, if only just recently aided and amplified by our social media culture.

That’s what the word passion points us to. The book is not filled with poems about romantic love or sexual fury, though there are some masterful examples of those that show Jordan’s broad range on the page. Instead, passion here might refer to the tools Jordan uses to make her work here so memorable, but also so modern and experimental: urgency, time, music, pain, white space, marked silences, hushed pauses, earned wisdom, the language of the female psyche.

Take a look at these lines from her devastating poem, “Case in Point,” in which she eases into the topic of rape by examining the nature of feminine silence.

“I have decided I have something to say

about female silence: so to speak

these are my 2¢ on the subject:

2 weeks ago I was raped for the second

time in my life the first occasion

being a whiteman and the most recent

situation being a blackman actually

The poem continues with Jordan describing that second attack in excruciating detail, while also adding music, repetition (notice the two weeks and the two cents and the two attacks), and by remembering to say as much about the pressures on women to speak up about their experiences on a certain timetable, as she says about the topic of gender violence itself.

In this book, Jordan is graphic about everything. But not as a stranger might be. Instead, she is intimate, as if speaking to us, bringing us into her confidence, as she does in this stanza from “Toward a City that Sings”:

“Into the topaz crystalline signals

the nightplane lowers my body

scintillate with longing to lie positive

the electric waters of your flesh

I will never tell you the meaning of this poem:

Just say, “She wrote it and I recognize

let it go at that. Although

it is all the willingness you lend

as when you picked it up

the garbage scattering the cool

Passion reads, also, like an attempt to pay ancestral debts, with Jordan honoring her saviors with poems to Sojourner Truth, Ntozake Shange, and even Fannie Lou Hammer.

It is also a stab at the gathering of roots, with poems to South African Women on the other side of space and time, and to more recent events in the Caribbean in the form of a soulful poem about Vieques, Puerto Rico, and an unfortunate, gushing one she dedicated to Fidel Castro when both were alive and doing what they are each remembered for. In her case, poetry. In his case, the murdering of political opponents.

And yet, in the end, that gathering may be the hardest job the title does: serving as organizing principle uniting Jordan’s own passions: race, blackness, feminism, gender violence, colonization, love, and, yes, lust, as in this example from her poem, “An Explanation Always Follows”:

“Slicing a small peach the older

a morsel of the peach into his mouth

savoring the fruit he

does not masticate the morsel

must avert my eyes or

Even lust, in Jordan’s hands, becomes a statement of belief: that a woman has a right to her passions, and that nothing need be excluded from her experience regardless of race, age, or status. But also that every poem should be a poem, regardless of the rage that inspired it, or the activist who wrote it. That it should still always do its jobs: beauty, rhythm, insight, resonance.