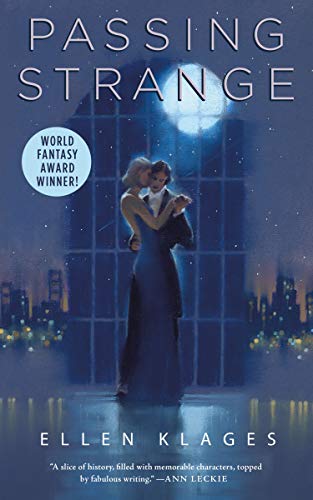 “Ellen Klages is an author with a true talent for storytelling and an eye for the beautiful detail.”

Finding a heretofore unknown author can be very much like finding a new friend.

For this to happen, it is required that the author’s sensibility be in sympathy with the reader’s own. And that there be a commonality in language, in the manner in which the world of the novel is brought to life. And that there be a willingness on the part of all parties involved that foibles, blemishes, and the like be, if not completely overlooked, at least acknowledged and accepted.

It is just the way with author Ellen Klages, who the reader now thinks of as at least a buddy of sorts.

The reader must, in mentioning her, apologize for not having read her many previous works, some of them award winners, before moving forward with the discussion of her new novel, Passing Strange.

In terms of plot, Strange is something of a mashup. It has a sort of science-fiction-y magical aspect, what with the inclusion of characters who are witches capable of folding maps into origami that somehow makes it possible to run down an alley and emerge a mile or two away from where you began only steps ago—something that would be even handier in Manhattan today than it is in the San Francisco of 1940 in which our story is set.

This magic is set against the world of pulps, and, specifically, the wonderful, busty covers of the pulp magazine of old.

And against a same-sex match up between two women, the artist of those pulp covers and a young girl singer named Spike.

Thus, Passing Strange defies categorization just as the book’s central relationship defies the convention of its day. (Although, given the uptick in barks over something as simple as the existence of a gay character in a new Disney movie, it seems that such conventions may well be cyclical—have we returned to a time in which some very pale folks wish to disappear a whole community of folks by refusing to allow them to be discussed or in any way shown?)

Mixed in with all this is a sort of thriller, in which the male partner of one of the women drunkenly returns and presents all sorts of problems for our protagonists. And this is perhaps the chief flaw in the narrative: the fact that every male in the book seems in some way abusive, and in all ways lazy, sloppy, and mean. Which serves to make the reader yearn for the one nice guy in all of San Francisco in 1940 that the author could have created had she wanted to.

Two things get beautifully rendered by Klages: the San Francisco of the World War II era and the two lead characters, who lives are so vibrantly depicted on the printed page, especially as they lean toward one another and begin their relationship.

Both aspects of this fiction are presented with apparent love on the part of the author as she imagines the most perfect relationship set in the world’s most perfectly beautifully city. Which brings out the best in our author. As here, in this brief description of San Francisco:

“Bow-windowed buildings and weathered frame houses clung to the precarious sides of Telegraph Hill like goats. From an open window came the sound of someone expertly practicing a trumpet.”

While on the subject of musical instruments, there is also this:

“A single, pinpoint spot illuminated the microphone. A saxophone began a slow, blue-tinged melody that sounded like the city at night: cold drinks and hot neon and people out looking for love, or danger—or both.”

All rather beautifully noir, something that is as natural to San Francisco as it is to Los Angeles in that same era.

Such is the true magic of Passing Strange, the creation of San Francisco as a place of bright sunshine and dark shadows. A gay mecca in the making. Where women, by law, had to at all times be wearing at least three pieces of traditional “women’s apparel” in order not to be hauled off to jail for impersonating a man. A place festooned with its own Stonewall harassments decades before the riots.

This allows for Klages to combine in her narrative a love story and a story of struggle for the legal right to love. This gives the book a sort of “ripped from the headlines” aspect of a Law & Order: SVU episode. And combining this with the aspect of a time long ago, a place far away gives the book its special friction.

But for the rest, the reader remains unconvinced as to the need for or the success of the inclusion of the witches. As the subplot goes nowhere and remains very much only a device by which, at most opportune times, the maps allow escape when escape seems impossible, it would have been better omitted. Or made more central to the tale, if it had to remain. As is, the reader concludes that witches are better left to Salem than they are to San Francisco and to a tale of bodice-ripping magazine covers, their artists and their models.

Ellen Klages is an author with a true talent for storytelling and an eye for the beautiful detail. She has a way for making the reader care for her characters because she herself loves them so very much. To read Passing Strange is to want to go back and read more of her books. And to think of each one as every more cementing the friendship between the reader and this skillful author.