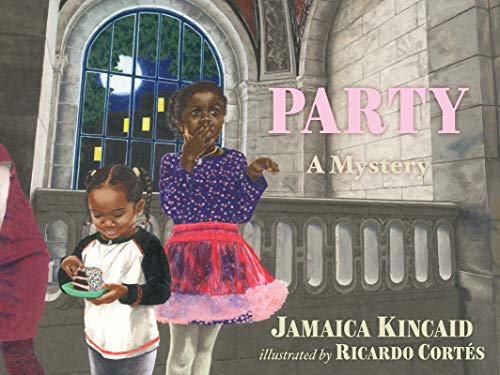 The work of Jamaica Kincaid, author, memoirist, essayist, professor, reached literary heights despite her biography: She was born into poverty in St. Johns, in the Caribbean and lacked the benefit of any formal education. Yet her work has been an important addition to our culture. Her exploration of themes such as family relationships, personhood, marriage, and the taint of colonialism have been handled in fresh, immediate narratives that garnered both praise and also criticism, inevitably bestowing on her the status of one of the brightest lights of fiction.

Now, she has written a picture book for children, Party. There is praise from Michiko Kakatani, Ta-Nehisi Coates, and many other notable reviewers. This reviewer disagrees.

Publishers Weekly calls Party “a sendup of the Nancy Drew mysteries.” In it, she has tried to employ a similar technique of embedding the reader directly into the heart of a story. In her fiction, she often doesn’t bother to explain, rather choosing to immerse her readers right into her world, however, this approach only confuses in this shorter form of storytelling. And the language she’s using is not friendly to young readers, for example:

“Pam, now locked in indecision, turned back to whatever it was that had caught her attention so firmly before. Her face darkened in puzzlement, her eyes darting here and there furiously and fast.”

These may be perfect sentences in a short story, but even as authors love to expand vocabulary and syntax for their young readers, they avoid cumbersome, complex sentence structure except for certain effect.

Then there is the question of story. In Party, the young black girls spot something “vile” down below. We never learn what it is. They, as protagonists, do nothing to further the action. The vile thing leaves mysteriously. And then the story simply ends, as much of an enigma as it began. We dip in and then out of a world that is luxuriously illustrated in a realistic, almost photographically detailed dramatic style by Ricardo Cortes. He is telling a story in pictures, but again, the heightened drama in the art does little to explicate the tale Kincaid is telling. The result is an extravagant mess.

The illustrator, Cortes, says: “I resisted the urge to reveal anything too overtly. I have my own suspicions about what the girls see and I hope every reader does too.”

If parents or teachers feel their charges might simply enjoy this large-format book because it does render young, black girls at one moment of their lives, to simply see themselves drawn so beautifully by Cortes, this is one reason to recommend this picture book. It could also be used to open a discussion about mysteries and invite opinions because there is so much unexplained.