Partner to Power: The Secret World of Presidents and Their Most Trusted Advisers 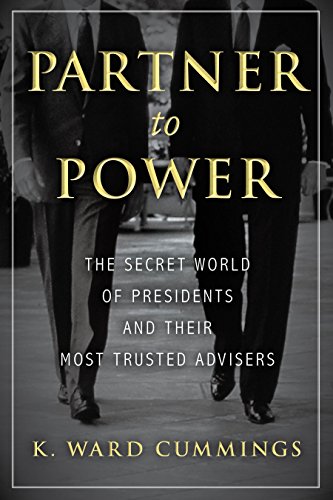 "Partner to Power, however, 'reminds us that some of the most powerful people working in the White House, indeed in the whole of government, are often the least known by the public.'"

The President of the United States serves as the face and manager of an administration, not as its sole member. Partner to Power provides "deeper analysis of the role of the right-hand man [or woman] in American presidential history."

K. Ward Cummings writes that the "vast majority of presidents acted as their own chiefs of staff" until, during the Great Depression, "the White House staff mushroomed to match the explosive growth of the federal government." Partner to Power tells duel biographies of the advisors and their respective presidents.

Cummings argues that trust qualifies someone for this job. He begins with Harry Hopkins. President Roosevelt sent him on a critical diplomatic mission to World II Europe although his "health was precarious." Hopkins' qualifications were little more than he "enjoyed the president's complete confidence."

The presidential advisors had roles in "the Emancipation Proclamation and The Great Society to ObamaCare." President Monroe and his Secretary of State John Quincy Adams left a record of diplomatic achievement. Franklin Roosevelt, however, went through advisors "like tissue paper" leaving them "desiccated approximations of their former selves."

These individuals can hold any of a number of official titles or functions including Vice President. All possessed "unequal access to the president," "the right-hand man understands the president's thinking." Secretary of State William Seward "may have been Lincoln's best friend during his White House years."

The RHM ("right-hand man") can come from anywhere. John F. Kennedy "leaned heavily on his brother" Robert F. Kennedy during the Cuban Missile Crisis. Wilson, FDR, and Clinton relied on their respective wives although some Americans are uncomfortable "with presidents delegating policy making authority to their spouses."

Often presidents chose advisors who had what they lacked. Clark Clifford, "partner to power" to President Truman, had "a gift for persuasion and an ability to masterfully shape and present the ideas of others." "Despite his mercurial nature, [Alexander] Hamilton would become invaluable to Washington, for the way he helped to inspire him."

Critics called Sherman Adams and Dick Chaney de facto presidents. Ronald Reagan "lacked the talent, or perhaps even the will, to effectively manage the men and women who served him."

The history of these advisors has a negative side. Secretary of War John Eaton pushed for the removal of the Cherokees to the West. Woodrow Wilson's Edward House "never lost sight of the fact that Wilson was a means of achieving his lifelong pursuit of power without accountability."

This small book, considering the subject, even includes the evolving Trump administration. It covers a lot of background not always relevant to the subject. Partner to Power, however, "reminds us that some of the most powerful people working in the White House, indeed in the whole of government, are often the least known by the public."