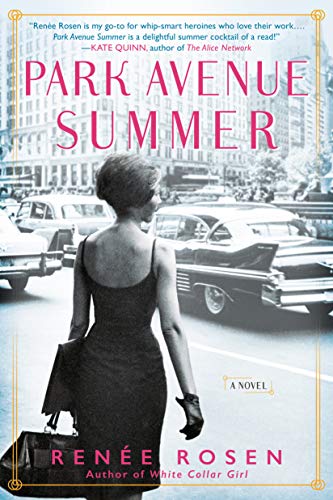 “For anyone who’s ever wanted to conquer the Big Apple, this novel allows a vicarious experience while witnessing close up the early saga of the force that Cosmopolitan became for Helen Gurley Brown’s ‘girls’ across America.”

Now that the sixties are officially considered the approved landscape of “historical fiction,” there seem to be many works to choose from set in that decade. Park Avenue Summer, inspired by the TV series Mad Men, a coming-of-age beach read, takes place during the summer of 1965 leading up to the first issue of Cosmopolitan magazine under the aegis of Helen Gurley Brown. Just enough time for Alice, a greenhorn from a small Midwestern town to have as many thrills as an attractive, intelligent and hard-working young woman might hope for on her first foray into New York.

Alice has come to the Big Apple in homage to her mother, who died in a car accident when Alice was 13, and whose essence Alice seems to encounter wherever she goes. Alice’s mother, originally from New York, fell in love with her father here, but returned to live the rest of her life in a small town in Ohio.

Alice’s mission is to become a photographer, but she’s driven to understand her mother and to make her proud. Along this thread, Elaine Sloan, an old New York friend of her mother, recommends Alice to work as secretary and gopher girl for Helen Gurley Brown, the first woman editor of Cosmopolitan.

The magazine is at a crossroads, and Brown, famous for her bestseller Sex and the Single Girl, has been hired to steer it confidently into its next issue. Alice is poised to tell this story.

The story gets going when Brown begins to make her intentions for the magazine clear, and the rest of this publishing bubble dig in their heels in resistance. The problem is, Hearst, its publisher, has lost its nerve, and Brown stands firm with her plan to titillate “her girls”—young, independent women who have taken the “free love” message to heart, and just need a little encouragement to have a fulfilling sex life.

As Brown’s right-hand girl, Alice witnesses resignations of editors, writers, and photographers, as well as every battle created by Brown’s intentions for the magazine. Alice becomes Brown’s steadfast supporter, describing a small woman with a huge personality, dressed impeccably in fashionable outfits, (scarred only by a run snagged in her stocking), snapping pencils in frustration, taking “nooners” with her husband at lunchtime when the going gets rough.

Meanwhile Alice is attracted to “a player,” a handsome young man working for Hearst with pockets deep enough to wine and dine her at New York’s most famous restaurants on their lunch breaks. When he asks her to spy on Brown for him, she refuses but is lured into a satisfying sexual relationship with him—encouraged by Brown.

As a wannabe photographer, Alice needs to bring her work up to the New York level. She meets Christopher, who introduces her to the world of high fashion photography. As the August issue nears publication, and Brown chooses a bosomy woman for the cover instead of Sean Connery, Brown gambles the future of her career in New York against the success of her version of the magazine.

The era is recaptured detail by detail, including a lot of cigarette smoking and drinking. In Park Avenue Summer, New York doesn’t really resemble the rest of America in 1965; the reader doesn’t see much about civil rights, the Vietnam War, LSD, hippies and everything else going on in that decade. The city of “My Way” is still wearing a suit and gazing at its own stylish, white male navel. The urgent intrigues circle around the glamorous world of photo shoots, writing and publishing, martini lunches, art openings, cigarettes, and expensive, hip restaurants. Amid this chaos Helen Gurley Brown and her Cosmopolitan magazine create a sideways version of women’s liberation: great sex and how to get it and enjoy it.

It’s seductive and pleasing to enter the world of Park Avenue Summer for nostalgia about the fantasy of New York in the sixties. For anyone who’s ever wanted to conquer the Big Apple, this novel allows a vicarious experience while witnessing close up the early saga of the force that Cosmopolitan became for Helen Gurley Brown’s “girls” across America.