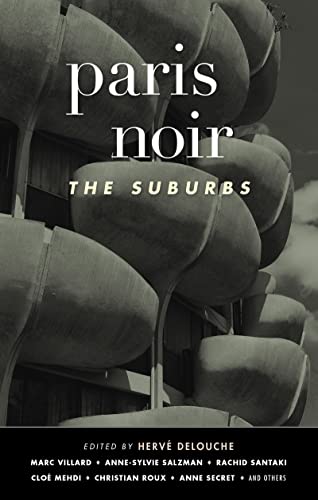 “The assortment of ethnicities and grudges displayed in Paris Noir: The Suburbs could become a treasure chest of resources for any noir author seeking a more gruesome approach or a more relentless destruction of the soul.”

The “suburbs” of Paris in Paris Noir are gritty housing areas for blue-collar and immigrant workers soiled with desperation, hunger, and violence. Unlike Glasgow in Scottish noir, or Dublin, or the crowded and poverty stricken regions of London, they seem to exist cut off from the world-class city that centers them. Nothing good can grow there other than regret.

Or so the tales in the Akashic Books collection of Paris Noir: The Suburbs would suggest. They range from creepy to freaky to tragic, and there are no joys sprouting from the sidewalks, cracked roads, and worn patches of dirt. Worst of all are the tenements, the housing projects forming nations of their own. And this is what the “suburbs” are for Paris.

Many of the stories use present-tense presentation to add to gritty ambience. For example, in “I Am Not Paris,” by Fleury-Mérogis, a young woman exposes the bizarre arrest of her cousin Sofiane, arrested and jailed really for belittling the Charlie Hebdo controversy. But “The whole nation was Charlie,” and soon her cousin’s skeptical remarks to a reporter land him in prison for the “offense of glorifying terrorism” in a joke. Prison turns out to be deadly, and this young Muslim narrator launches her own counter-action, with the declaration, “I am not Paris.”

That’s mild compared to the stories that follow that involve lovers brutally rejecting each other, gang initiatives, drugs intended to facilitate rape or other desecrations of the living. A diversity of author names suggests that the collected stories emerge from a multinational grimness of outlook and experience.

One of the creepiest stories in the collection is called “The Metamorphosis of Emma F.,” by Christian Roux. It positions an extremely ugly woman who’s been screwed, literally, for years by crude and nasty men. When an idea for reversing her situation occurs to her, it won’t be the men who suffer, but rather, a film actress who epitomizes what Emma has been starved for. Her method of turning the tables recalls the 1976 novel Who Is Killing the Great Chefs of Europe—without regret or remorse.

Add some overdoses, some marital killings, an overall cloud of menace and poison from the factories that pay for lives to be lived in misery and despair. There are many scenes that epitomize the dark and twisted, some of them similar to Dave Zeltserman’s grimmest full-length noir and horror. Even when escape into “nature” seems possible, as for Alex and Sandra in “The Donkey Cemetery” by Jean-Pierre Rumeau, count on menace and deadly force coming from the very terrain, and passion metamorphosed into wolf-like howls of threat and loss.

The assortment of ethnicities and grudges displayed in Paris Noir: The Suburbs could become a treasure chest of resources for any noir author seeking a more gruesome approach or a more relentless destruction of the soul. One might hope the real Paris suburbs are not so dark and blood drenched. But by the end of the collection, that hope seems almost foolish, and the body found on the quay seems to be the lucky guy in the story.