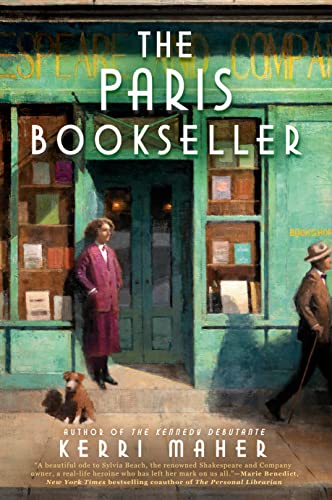 “Kerri Maher’s The Paris Bookseller is a worthy homage to Sylvia Beach and a love letter to all bookstores, libraries, and the passionate and committed women who run them.”

Kerri Maher’s latest historical novel featuring an influential woman, The Paris Bookseller, takes place in the City of Light during the years when Paris was the inspiration for writers, artists, philosophers, and other cultural greats such as Ernest Hemingway, James Joyce, Gertrude Stein, Ezra Pound, and many others of The Lost Generation.

The story revolves around Sylvia Beach, a newcomer to Paris from America who gets happily waylaid by a bookstore and a woman named Adrienne. As Sylvia's relationship with Adrienne blossoms, she opens Shakespeare and Company bookstore, and in doing so attracts the attention of much of Paris' intellectuals and creatives, including James Joyce.

The novel is a journey of which the reader already knows important historical details such as the fact that Joyce’s legendary novel Ulysses became a classic work of art. What readers may not know prior to reading The Paris Bookseller is exactly how Joyce’s novel became such a literary hit. This is where Maher, who wrote The Kennedy Debutante (a love story about Kathleen Kennedy, JFK’s sister), and The Girl in White Gloves (about the life of Grace Kelly), excels: drilling down on personal details of well-known historical events and celebrities and creating a real world in which they reside as a backdrop for the good stuff of her story.

When Joyce’s scandalous writing, which had been published here and there in snippets and articles in periodicals, was banned in the states, Sylvia decided to publish it and distribute it through her bookstore. If you love Paris, you'll love feeling like you're peeking into the magical, romantic, and literary world of Paris in 1919 through 1936, with all its changing societal norms, all its characters mingling and having conversations over books, and the labor of love that it was to publish Joyce's triumphant work.

Because Paris is an already-imagined locale so full of romance and story, the temptation is to simply slip into the front door of the bookstore itself and hide behind the rows of books, to smell the aromas of Gitanes and espressos, to hear the Français. Indeed, The Paris Bookseller takes the reader into conversations with most of the famous artists, writers, and composers such as Somerset Maugham, E. M. Forster, Albert Einstein, and George Bernard Shaw. Even to the theater of George Antheil’s celebrated Ballet Mecanique with one half of the audience standing, booing, and throwing fruit, while the other half applauds enthusiastically.

Maher drops her reader into the zeitgeist of the early 20th century, the aftermath of the first world war, the age of modernism, women’s struggle to vote. The portrait of her world between New York and Paris emerges as a complicated liberal society alongside strait-laced and more conservative opinions that held society in their thrall. In the US, Prohibition, the Comstock and Espionage acts were all counterpoint to intellectual freedom and an unspoken acceptance of gay culture in Paris. While the cabarets and speakeasies flourished in Chicago and New York, the alcohol was “as illegal as gay acts of love, but the artists and intellectuals of the time embraced both.”

As a publisher, Sylvia concocted a clever plan to smuggle books, sometimes one at a time into the states via Canada as the book was published in France while it was still illegal in the US. She paid Joyce’s doctor bills and his accounts throughout their working relationship, and was personally responsible for getting the work into the world.

Although larger publishers in the states embraced the book once a legal ruling lifted the ban on it, Sylvia Beach was the original determined visionary who spearheaded the difficult, expensive, and delicate process of getting this important work in front of its first audiences.

The parallels of today’s political and social pendulum swinging from one extreme to the next, the permissiveness and censorship, the human response to immigration, the vibrant life of writers and artists—all these themes are all a backdrop to The Paris Bookseller, and they resonate today. Kerri Maher’s The Paris Bookseller is a worthy homage to Sylvia Beach and a love letter to all bookstores, libraries, and the passionate and committed women who run them.