Paranoid: Exploring Suspicion from the Dubious to the Delusional 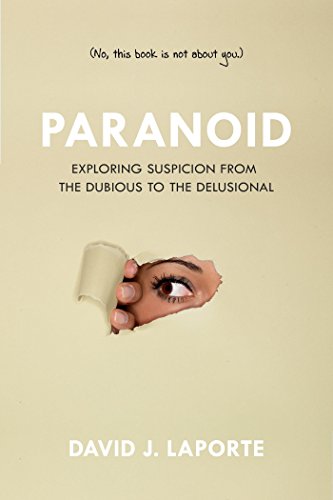 “Sometimes it feels like Big Brother is watching—even when he’s not.”

Before opening Paranoid by Dr. David Laporte, I asked myself when I had last read a book about paranoia. I couldn't think of one, and the answer was both obvious and surprising: One had never been written (that I knew of)!

This book breaks new ground and provides significant understanding to a concept that is long-standing and may seem mysterious. Mild and perhaps necessary suspiciousness is outlined as well as the deadly behavior of violent headline makers.

Paranoid is a word that has moved from a formal mental health diagnosis to become part the common lexicon. "Don't listen to Joe he's just paranoid," "Honey, stop being paranoid there's nothing to worry about."

One of the author’s principles is that there exists a “suspiciousness system” that has been evolving as long as there have been humans. For survival reasons, being wary of a strange person or a big animal may save a person’s life, and in that sense is absolutely necessary. The system/spectrum expands from "normal" and helpful suspiciousness, to increased, excess and abnormal suspiciousness, to true delusional paranoia. Where, however, are the defining lines between a helpful skepticism, mild dis-ease, and a diagnosable disorder? Aye, there's the rub. It depends on who you ask: the person who is suspicious or those around him or her who can look at issues more objectively.

True delusional paranoia is an unreasonable suspiciousness that cannot be altered by discussion, argument, or observable "facts." The paranoid individual takes both large and small occurrences and fits them together into a jigsaw puzzle that to them makes “irrefutable sense." For many who experience paranoia, it is painful and a dominating emotion. One must always be on guard for evidence of danger, risk, or conspiracy. The slightest movement, placement of an object, song on the radio, or raised eyebrow can be interpreted as a sign that alerts the person to conspiracy or danger. We may see a person at the airport who crosses their legs, but the paranoid person sees a covert agent signaling their colleagues.

Two specific variations of paranoia—jealousy and militia organizations—are discussed both for their similarities to and differences from pure paranoia. Analogous to the "suspiciousness system" the author develops a “jealousy continuum.” From an evolutionary, reproductive standpoint some jealousy is "helpful" and a normal human emotion. The complete absence of jealousy is unhealthy for relationships as it signals a low level of concern or commitment on the part of the person who has none. The pathologically jealous person, however, will search for evidence of infidelity to the nth degree. Much time may be spent trailing a partner and searching emails, texts, and phone messages for indications of "cheating,” which cannot be assuaged by denials. It is easy to see that the partner of a pathologically jealous person might pull away, avoid sex, or spend time with other people—all “confirmation” of the jealous person’s belief.

Militias are described as paramilitary organizations banded together to counteract the threat of government suppression, search, and seizure, the Trilateral Commission, the Illuminati, or other shadow organizations. The members share the belief that a strong and sometimes secret organization is necessary to preserve "freedom" and/or risk subjugation or obliteration.

The strength of this book is the well referenced and often "behind the scenes" look at both benign and horrific behavior of paranoid people who have chosen to act on their beliefs. They feel that they are ridding themselves or the world of their persecutors or tormentors. Such situations often dominate the 24/7 news cycle for weeks as many of us try to understand "Why?"

Dr. Laporte often provides details from written manifestoes, court transcripts, or other verifiable sources that begin to make the seemingly incomprehensible at least partially understandable. Sandy Hook, Virginia Tech, and the Branch Dividian compound are all places of mass murder likely perpetrated by persons with underlying paranoid delusions. Andrea Yates, Timothy McVeigh, and Thomas Ferrante are likewise names emblazoned into our memories from their well-known deeds chronicled on front-page headline news. The author gives us their stories as well as a number of other lesser-known individuals who illustrate his principles, and are described in short fascinating vignettes. Readers will find the stories compelling and rarely collected in one volume.

One wishes that the author could give a more thorough and lengthy (only six pages) solution to paranoia and at times, its violent end point. Unfortunately answers are neither simple nor easily predicted in advance.

The author suggests that much paranoia can be treated through psychotherapy, medication, or both together. Usually this happens when treatment is successful for an underlying condition of which paranoia is but one feature such as depression, schizophrenia, PTSD, cocaine, or methamphetamine intoxication.

The criticisms of this book are minimal and stylistic. The author talks to the reader in a conversational almost “folksy” style, which may be intentional given the seriousness of the subject. Although it is not a textbook, eliminating a few of the “just’s” and “well’s” might add to the thoroughly professional volume that it is. The chapter sequence is well organized; however within the chapters there is a choppiness of flow which would be smoothed by a sentence or phrase of segue to introduce the next section or vignette.

The last chapter explores why paranoia may be increasing as we live in a society that monitors our Internet behavior, phone calls, texts, and even our day-to-day location via drones. The 21st century is indeed a time when “Big Brother is watching”—perhaps more than we even know.

In summary this is a wonderful start to exploring paranoia and will shine a bright light on a condition that has to date remained dark and murky.