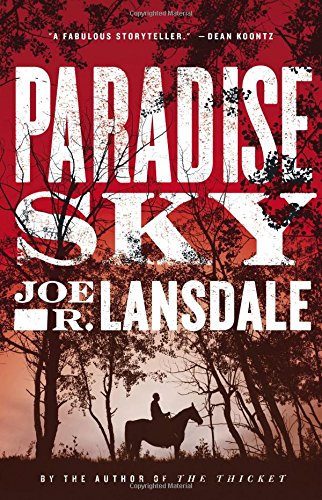 Reading Paradise Sky by Joe R. Lansdale is to immerse oneself in a realm of roughneck, shoot-’em-up western writing where fact and fiction blend effortlessly on the page, and the action is only outgunned by the author’s tilt for beautiful literary prose.

For that’s the thing about Lansdale: His writing keeps you riveted by fleet pacing, bawdy characters, sharp-witted banter, and enough action to stampede a cavalry train, but it’s never cheap, it’s never gratuitous. Instead he fills each page with heartbreak, suspense, hope, and laughter through the lives and situations of his characters. They’re fallible, impassioned, the type of people you could imagine filling your own life, only these characters are ratcheted up tenfold, magnifying the ugliness of their lusts, the shock of their misfortunes, the satisfaction of recompense.

The story goes that Nat Love (aka Deadwood Dick), a teenage black man, becomes fugitive from a Texas lynch mob after daring to gaze upon the derriere of a white woman in full public view while she’s hanging laundry. Her husband, Sam Ruggert, as vile a relentless zealot as any penned by Melville or McCarthy, dedicates life and resources to hunting down and punishing the “uppity” youth.

Paradise Sky follows the life of Nat as he grows up and searches the country for himself, and pursues love and freedom and adventure. He becomes a buffalo soldier, a gunslinger and trick shot, an associate of Wild Bill Hickok; he befriends many and makes equal number of enemies, all the while looking over his shoulder for Ruggert, who continues to hunt him, set to ruin or kill any good thing that happens in Nat’s life. It’s a long, tragic journey Nat Love travels, and every day seems fraught with tough obstacles and tougher choices.

And, as fantastic as the story is, it’s founded in historic fact. The real Nat Love birthed over a century of Old West mythology as a freed slave turned gunslinger and Indian fighter; his attributed persona, “Deadwood Dick” become the fodder for dime store adventure novels throughout the late 1800s. But what of Nat’s lore really happened or got fictionalized over the years matters less than a man’s chances of quick-drawing on Nat himself; it’s all just good storytelling.

Besides the western genre, Joe R. Lansdale has also successfully written in horror, action, mystery, and suspense, all in formats of novels, short stories, and comics. Fans of Paradise Sky may further enjoy his works of similar tone: The Bottoms (winner of the Edgar Award), The Thicket (one of best historical fiction books of 2013 per Library Journal), and Edge of Dark Water (2012 Booklist Editors' Choice: Adult Books for Young Adults by the American Library Association).