To Paradise: A Novel 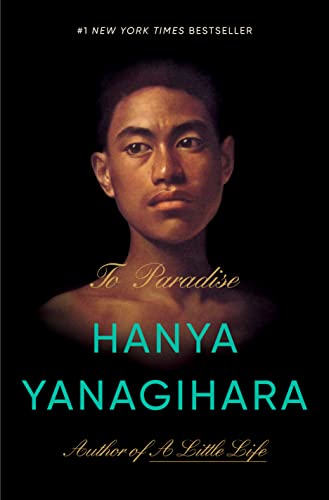 “To Paradise illustrates the power of narrative to make sense of our chaotic lives and even to endow them with beauty.”

Set in three different centuries in the same townhouse in Greenwich Village, To Paradise takes the reader on a journey through time that shows how societies and individuals are defined by both their histories and their hopes.

The first section evokes the vanished world of upper-class 19th century Manhattan. Like the work of the same name by Henry James, Yanagihara’s “Washington Square” describes a protagonist for whom a palatial house is both stronghold and prison.

Yanagihara provides compelling narratives even about minor characters. Her descriptions can morph into stories. Everyone in this novel is a storyteller; the fact that some stories are true and others not seems less important than whether or not people believe them.

The counterfactual aspects of this richly evoked historical setting, notably having gay marriage established in the “Free States” (the Northeast) at their founding in the 1790s, produce some incongruities. The central clandestine love affair is deprived of some poignancy, as the sexual aspect becomes matter of fact, though the affair is still secretive because of class differences.

The protagonist David Bingham, a mostly sympathetic character who does not fit in his upper-class world, unfortunately voices 19th century prejudices against immigrants and Jews (in a reference to “arriviste Jewish banks”), impairing our identification with him.

In addition, the author creates the “Colonies,” southern states where refugees are interned, presumably to address the current horrible treatment of many refugees in the United States. However, giving those refugees, depicted as white, the experiences of Black people escaping slavery—being hunted down and re-enslaved if they try to escape the “Colonies” for the “Free States”—revises history in a way that tends to undercut the uniqueness of the African American experience.

In the second section, set in 1993 during the AIDS epidemic, characters with the same names and some of the same physical characteristics as those in the first section recur. Charles Griffith is a wealthy, stocky, older person in both parts. David Bingham, however, is now a handsome person of mixed race and royal blood, born in Hawaii. The power dynamic between Charles and David in the first section is reversed in the second. Though the second set of characters could almost be the descendants of those in the first part, which would have been intriguing, details of the plot preclude that connection.

Yanagihara’s most compelling theme is the longing to be loved, the vulnerability such longing entails, and the difficulty of growing from childhood into adulthood, especially when early losses of parents have occurred, and large sums of money are involved. For “no one was ever free, . . . to know someone and to love them was to assume the task of remembering them, even if that person was still living.”

The David Bingham of the second section becomes a different kind of prisoner in the same townhouse in Washington Square. His father ends up in a sort of self-imposed prison in Hawaii, where much of this section is set. The subjugation of indigenous Hawaiian people in the land that was theirs, a version of the “paradise” to which the title alludes, is a major theme.

In the third section, climate change—bringing extreme heat, floods, and droughts—and recurring pandemics have reduced the world to a dystopia. The Washington Square townhouse has become an apartment building in “Section 8.”

Shortages of water, electricity, and food make life in New York City miserable. Refugees are held in centers where such necessities as sanitation, food, and water are almost impossible to obtain.

Charles Griffith is now a scientist grappling with the consequences of reduced government funding for investigation of viruses. He predicts the “big one,” an infectious virus that may sweep the globe, an event which does occur as this section goes on.

The third section, which constitutes about half the book, is dispiriting both in addressing the worst aspects of life at present and using some familiar dystopian tropes to do so. It is most effective, like the first two sections, when it focuses on specific details of individual lives. In this final section, the author expertly lays out and connects the threads of a multi-generational saga, creating suspense until the novel’s last page.

With this book, Yanagihara revives the tradition of the novel as not just recording but seeking to elevate the society it depicts. Though she presents the dream of a world in which “there would be no loneliness,” she unflinchingly shows “how brittle the poetry of our lives truly is.” This work enables the reader both to escape and reflect on world-shaking events of the present and the past. To Paradise illustrates the power of narrative to make sense of our chaotic lives and even to endow them with beauty.