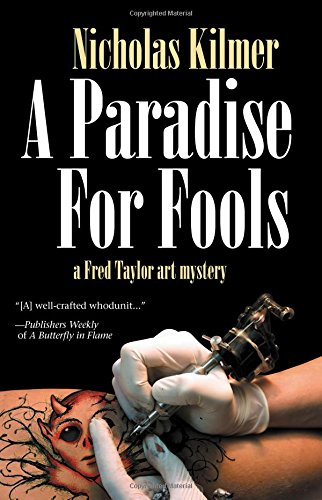 Would you consider getting a tattoo that looks as if Hieronymus Bosch had painted it? (He’s the 14th century Dutch painter best known for his fantastic imagery and triptychs in which each was essential to the meaning of the whole.) Perhaps you saw his “The Garden of Earthly Delights” in art history class. It’s the triptych that shows Adam and Eve on the left panel, fruit, nudes, and birds in the middle, and sinners punished in Hell on the right. Lots of other material to choose from, too, should you feel so inclined.

When Fred Taylor drops into a cheap salon to get his haircut, Kim, one of the stylists, is showing off her tat ink to the other hair cutter. Little does she know Taylor works for Clayton Reed, a crazy (since he’s rich, he gets to be called eccentric) mysterious Boston art collector. It seems a guy calling himself Arthur Pendragon is the tattooist, and he’s painting from “a dirty old wooden painting.”

Taylor decides to track down this possible Bosch.

He runs into a motley crew, including Sammy Flash who shares the illegal tattooing space with Arthur. Fred tracks Kim and Arthur back to high school in Nashua New Hampshire—“Another disappointed New England mill town, its river no longer harnessed to power idle and vanished looms; grand industrial architecture gone to rack and ruin; seedy if hopeful attempts to make something of the wreck that might attract tourism until such time as a building and design renaissance transformed the little city into a worthy echo of its former modesty.”

Mr. Kilmer’s overwrought prose is the main drawback of the book; the reader is torn away from the story by this look-at-me writing. Some editor should have mentioned to the author that a little of this rococo writing goes a very long way.

A New York auction house hears about the painting . . . and the race to find and claim it is on.

Rooting for Fred in his fledging romance with Cambridge librarian Molly Riley is an entertaining side feature of A Paradise for Fools. She seems able to follow his ADHD thoughts from a war story about his old classics professor to how to measure progress, to his admitting although he loves art, his failing in this culture is not having a profit instinct.

It’s encouraging to read about characters motivated by something other than money.

Fred Taylor is a self-sufficient guy, he can see his way around problems. He is able to support himself doing something he loves, something Arthur admires. All Arthur cares about is his art, but however great he is at tattooing, the problem of the starving artist rears its ugly head. Arthur may be a great tattooist, but he is copying, not doing original work. Is tattooing even real art? Who determines that? When his subjects die, his work goes away as well. Does that matter? Something to think about this the next time you visit a museum.