Paradise Falls: The True Story of an Environmental Catastrophe 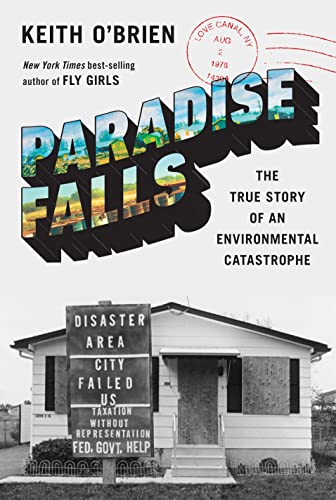 It all began as a utopian vision.

In 1892, charismatic entrepreneur William T. Love set out to build a huge metropolis called Model City on farmland to the east of Niagara Falls, NY. His city would have no tenements or saloons, housing for more than a million people, and be powered by hydroelectric dams on a new canal—the Love Canal—using water diverted from the falls.

A half century later, the abandoned canal, about a half mile long and 100 feet wide, served as a “waste disposal area” for Hooker Chemical, a major Niagara employer. Later, it was determined there were more than 200 chemical compounds—many toxic—in the pit.

As Keith O’Brien’s richly detailed Paradise Falls recounts, a neighborhood was built on the site in the 1950s, with a popular playground for children of the working-class suburb. By the 1970s, Love’s utopian dream had produced one of the worst environmental disasters in American history.

Until then, local residents disregarded the sweet-smelling odors in the area, which included many chemical plants. “They’d say it was the smell of money,” writes O’Brien.

Then they began noticing the inexplicable illnesses—epilepsy, asthma, and migraines—and high rates of birth defects and miscarriages in the neighborhood. Buried chemicals had leached into basements and yards and into the playground of the elementary school built over the canal.

The author takes pains to show that the ensuing health crisis—ignored at first by state authorities—became a national and international obsession for months because of the outrage of neighborhood families, especially young mothers like Lois Gibbs, who led the campaign to call attention to the neighborhood.

A homemaker turned hellraiser, Gibbs at one point even held two Environmental Protection Agency (EPA) officials hostage to force government action. In 1980, then-president Jimmy Carter removed 900 families in the most danger from the area, at a cost of $17 million.

Drawing on some 130 hours of interviews and newly accessed documents, the author tells the entire raucous story with fervor and immediacy. He captures the ire and passion of the Love Canal community, the actions and inactions of government leaders, and the strong surge of public support that ultimately helped save lives and laid the groundwork for the modern environmental movement.

The Love Canal crisis prompted Congressional passage of the Superfund Act, which authorizes the EPA to clean up contaminated sites with polluters covering the cost of damages they caused.

O’Brien describes the key roles of many notable figures of the era, from Al Gore, a young Tennessee congressperson who became an advocate for the Love Canal community, and celebrated attorney Louis Nizer, who represented Hooker’s parent company, Occidental Petroleum.

Younger readers will find themselves swept up in this intense account of a notorious toxic waste disaster nearly four decades ago. Other will gain new understanding of the complexities of “Love Canal.”