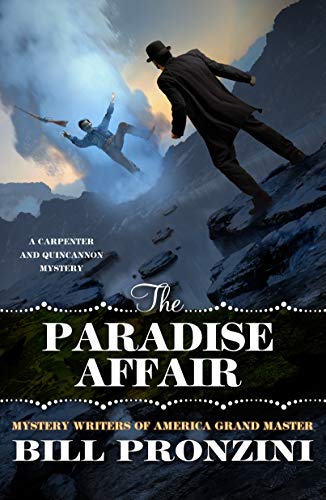 In some literary circles, describing a novel as “light reading” can be taken as a slur. Not so with this one. It’s a full, multidimensional novel crafted with a light but deft hand, providing an entertaining and thoughtful read without having to work hard.

The Paradise Affair is book 9 in the historical mystery series about Sabina Carpenter and John Quincannon, professional detectives. Each book is called The [Something] Affair, and in this one the paradise of title refers to the Hawaiian Islands.

Why they would sail to a not-yet-wealthy outpost in the middle of the Pacific Ocean? Normally their victims, including Quincannon’s client, were rich Californians within range of Quincannon’s and Carpenter’s San Francisco base. The con men had gotten away with the stock certificates, bearer bonds, and cash they stole from Quincannon’s client. And “the one thing above all others that Quincannon could not abide was failure.”

So he boards the next steamer bound for Hawaii and continues his chase.

Sabina—his agency partner for years and now his wife of six months—finagles a reason to accompany him, so they can append a second honeymoon to the business trip. Once settled in Honolulu at a guest house provided by friends, she intends to enjoy the pleasures of paradise while her husband pursues his quarries between islands in the Hawaiian chain. Instead, she ends up with her own case right next door.

Thus the story is divided into segments featuring Quincannon’s adventures and frustrations in closing his case, which proves to be a whodunit on top of capturing thieves; Sabina’s involvement in solving a locked-room mystery; and their combined interactions with each other and the remaining characters.

Each substory treats readers to details of time and place through brief evocations and vocabulary in use at the time (such as “lucifers” for “matches” and “equipage” for a horse-drawn carriage and its attendants), along with references to events of the day, such as the Spanish-American War. These give the book an authentic feel and help broaden reader knowledge about the era.

As well, the characters are simply but clearly drawn and have enough quirks to remain individual and believable without needing deep description.

A refreshing twist compared to most tales set in Hawaii is presentation of the weather. Tropical paradise isn’t always paradisiacal. In this book we learn about Kona weather: “The kona winds are actually blown-out typhoons that have come up across the equator. They bring heavy rainstorms” and other violent conditions. “The Polynesians believed them to be ‘sick winds,’ that kona weather is ‘dying weather.’”

Enough people die in this story to make one think about the relationship between climate and fate.

Kona weather comes around two to three times a year and can last for over a week. It includes debilitating heat and humidity between storms. Quincannon and Carpenter arrive in Hawaii during one of these weather episodes, which interferes with their travel, their business, and their vacation. So much for paradise!

Readers who happen to know something about early Hawaiian culture will likely guess the profit motive for the swindlers Quincannon is after, but for those unfamiliar (including the main characters) it will likely come as a surprise. Sabina’s locked-room mystery is about 50/50 for ease of guess-ability. Clues are steadily provided in both cases, but with dual plots in progress, conveyed through switching viewpoints, it isn’t always easy to follow them.

Yet it’s not mind-bendingly hard, either. This slim novel is not meant to be the most challenging puzzle possible, aimed at confounding readers. Instead it’s a little of this and a little of that, neatly melded together to give us a likeable detective team, an interesting period, a pair of intellectual-poser plots, and a setting most of us will never see but may be curious about. The prose style is swift from spareness and careful craft, versus breathless page-turning style.

Best of all, the book can be read as a stand-alone. It does not rely on the previous eight volumes to give readers what they need for a complete story. That makes it a good entry point for a new series or reader, especially because if it suits reader taste, there’s a huge body of work by an award-winning Grand Master of mystery to explore.