Pan's Labyrinth: The Labyrinth of the Faun 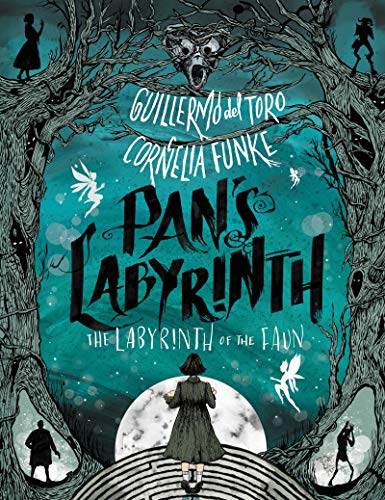 “dark and violent, while also beautiful. The protagonist is a young teen, but the themes are harsh and painful. The fantasy aspects allow the darkness to come to life . . .”

“It is said that long, long ago, there lived a princess in an underground realm, where neither lies nor pain exist, who dreamt of the human world. Princess Moanna dreamt of a perfect blue sky and an infinite sea of clouds; she dreamt of the sun and the grass and the taste of rain . . . So, one day the princess escaped her guards and came to our world. Soon the sun erased all her memories and she forgot who she was or where she came from. She wandered the earth, suffering cold, sickness, and pain. And finally, she died.”

The story of Pan’s Labyrinth begins with this beautiful, sad tale, but quickly changes to a different atmosphere. It is 1944 Spain, in the midst of violent fighting and a dark world of hatred and mistrust. Ofelia, the protagonist, is entering a new home.

“It was the year 1944 and the girl sitting in one of the cars, next to her pregnant mother, didn’t understand what the trees whispered. Her name was Ofelia and she knew everything about the pain of loss, although she was only thirteen years old. Her father had died just a year ago and Ofelia missed him so terribly that at times her heart felt like an empty box with nothing but the echo of her pain in it.”

On this same day Ofelia is visited by what she sees as a fairy, who introduces her to a labyrinth. In the weeks to come Ofelia meets the faun who lives there, who tells her she is a long-lost princess, and that she must complete three tasks in order to return to her true home. Ofelia wants to believe him, but also must protect her mother and unborn brother from her mother’s new husband, the cruel Spanish general Ofelia thinks of as the Wolf.

Ofelia finds support from Mercedes, the housekeeper, but she also is in danger from the Wolf, should he find out she is supplying the rebels who hide in the woods. Ofelia is not sure who to trust, or how to keep her mother safe.

“The Wolf shook her and Ofelia felt his wish to do more. Break her. Slash her like one of the rabbits the cook prepared in the kitchen for him and his men. Finally, he let go of her with a rude curse and took off his cap, breathing heavily, smoothing his hair. For the first time there was a crack in his mask and it frightened Ofelia more than the Faun’s rage. The Wolf would never forgive that she’d seen him weak—just as he wouldn’t forgive that she hadn’t told him about Mercedes.”

This story is dark and violent, while also beautiful. The protagonist is a young teen, but the themes are harsh and painful. The fantasy aspects allow the darkness to come to life in a way reality could not. Recommended for anyone who enjoys a dip into the world of magic and can accept the frightening aspects of such a world.