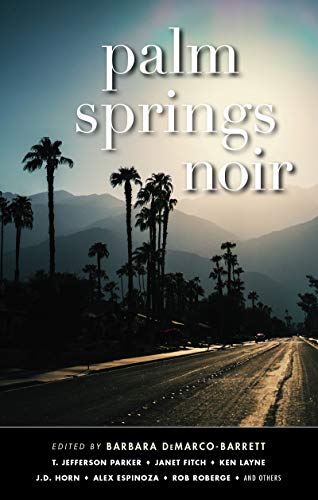 The historic journey that transformed Palm Springs from a Native American oasis to Hollywood’s playground of the stars began over 2,000 years ago. It wasn’t until the early 1900s that the area began to establish itself as a world-class vacation destination. Many of its first residents came here because of the dry, hot climate that was seen as beneficial to their health.

In the early 1930s, Palm Springs became one of the most desired getaways for Hollywood’s elites. Located just over 100 miles southeast of Los Angeles, the area had an enduring reputation as a safe haven that was known to be beyond the reach of the gossip columnists. Numerous movie stars visited or bought homes here including Douglas Fairbanks, Bing Crosby, Spencer Tracy, Frank Sinatra, Elvis Presley, and Bob Hope. Today, Palm Springs is known as the unofficial capital of the golf world.

Akashic Books was founded in 1997 by Johnny Temple with the objective "to make literature more part of popular culture, not just a part of elitist culture." The Brooklyn-based publisher of urban literary fiction and political nonfiction released their first noir anthology, Brooklyn Noir, edited by Tim McLoughlin in 2004. Since the inception of the noir series Akashic has published nearly 100 volumes. Each is comprised of original short stories that are set in a distinct location within the geographic area of the book.

Palm Springs Noir edited by Barbara Demarco-Barrett is the next installment in the award-winning series. She is the long-time host of Writers on Writing on KUCI-FM and is the Los Angeles Times bestselling author of Pen on Fire: A Busy Woman's Guide to Igniting the Writer Within (Mariner Books, 2004). Her critically acclaimed short story Crazy for You was first published in Orange County Noir (2010) and was included in Akashic’s best of noir compilation USA Noir: Best of Akashic Noir (2013). Besides editing, DeMarco-Barrett also contributes a delightfully sensual and dynamically suspense-filled story The Water Holds You Still to this new collection.

As DeMarco-Barrett eloquently and expressively writes in the introduction, “In noir, the main characters might want their lives to improve and may have high aspirations and goals . . . but they keep making bad choices, and things go from bad to worse…The best noir writers make us feel the heat of the sun, the touch of a lover. Setting can be gritty but can also be sublime . . . Palm Springs, which may seem like an odd setting for a collection of dark short stories . . . These are not stories you’ll read in the glossy coffee-table books that feature Palm Spring’s good life . . . The stories in this collection come on like the wicked dust storms common to the area.”

The book features original short stories by 14 talented Southern California writers such as T. Jefferson Parker, Janet Fitch, and Eric Beetner. This compilation is a roller coaster ride that’s filled with loads of suspense, mystery, and steamy sexiness. Brilliantly conceived, DeMarco-Barrett and the other contributing authors effortlessly transport the reader to the edgy, moody, and sleazier side of one of Southern California’s most renowned and iconic locales. A sure thing bestseller and a must-have summer read, Palm Springs Noir unquestionably brings the heat. Bravo!