Palm Beach, Mar-a-Lago, and the Rise of America's Xanadu 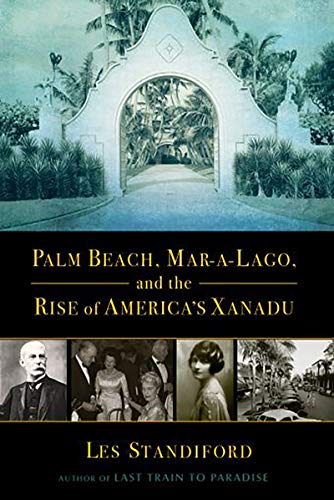 “Les Standiford has created quite a ride for the reader, from pioneers to posh estates to presidents. It is highly recommended.”

Les Standiford, one of the masters of Florida literature, has done it yet again in his new book about the island of Palm Beach, and more specifically Mar-a-Lago.

This story has it all: adultery, thievery, greed, love, insanity, government corruption, and some highly unusual deaths. The one common denominator throughout this 150-year long tale is money. From Henry Flagler in the 1880s to the current presidential occupant of Mar-a-Lago, Standiford details how money motivated the excesses, overcame the objections, and insulated the island’s inhabitants from those other people, many of whom worked for them, across the water in West Palm Beach.

His preface—Flagrante—gives a hint of what’s coming for the reader. Trying to catch her husband E. F. Hutton in the act of having sex with the new French maid, in 1935 Marjorie Merriweather Post Hutton rigged his bed to ring a bell if the weight of two bodies pressed vigorously down on it. She also put talcum powder on the sheets to show they’d been disturbed, and threads across the door’s threshold. All these rather Machiavellian methods must’ve worked. She and Hutton were divorced later that same year on the grounds of his adultery. As the reader will see throughout the book, Marjorie was not a wallflower.

Standiford provides an overview of island’s early history, populated with remarkably tough hardscrabble pioneers, a stark contrast to later denizens. In the 1890s, railroad magnate Henry Flagler’s attention was drawn to the area and that changed everything. Soon the summer elite of Newport and Cape Cod had a winter escape route—a railroad line directly to a tropical island in Florida.

By the 1920s, the movers and shakers of the world either wintered in Palm Beach or visited those already there. And they included those nouveau riche types that began appearing in America. That’s when the game of architectural one-upmanship in Palm Beach really got going.

Sedate cottages of the early days didn’t sufficiently express the attitude of the new arrivals. They wanted homes that symbolized power. In the chapter titled Gloria in Excelsis, Standiford brings into the story the designers who created massive castles for Palm Beach, including Mar-a-Lago. Competition to build the biggest, most ornate, exotic, or innovatively comfortable was now in high gear, fueled by the seemingly neverending money of the Roaring Twenties.

The main characters of the book are always the owners, however. Standiford shows them in vivid detail, sometimes wicked and other times pathetic. Henry Flagler, Marjorie Merriweather Post, E. F. Hutton, and their contemporaries built a Xanadu of mansions, clubs, and soirees, where American presidents, Wall Street tycoons, Hollywood glitterati, and European nobility mingled in opulent luxury on their very own private island.

Standiford explains how Palm Beach made it through the Great Depression years in relatively good shape—the rich still had money, but now they muted its image. The place calmed down, staying that way even when the Kennedys arrived to play in the ’50s and ’60s. Palm Beach had matured into a quaint, very comfortable time capsule of a bygone era.

The book ends with an interesting description of how the tranquility suddenly stopped in the 1980s with the arrival of Donald Trump. Again, Standiford follows the money, this time to explain The Donald’s machinations to acquire Mar-a-Lago, Marjorie Merriweather Post Hutton’s greatest accomplishment. Today, with the Trump presidency, Palm Beach is the home of the Winter White House and a center of world intrigue. Marjorie would completely understand and approve.

Les Standiford has created quite a ride for the reader, from pioneers to posh estates to presidents. It is highly recommended.

Robert N. Macomber is a staff writer at New York Journal of Books.