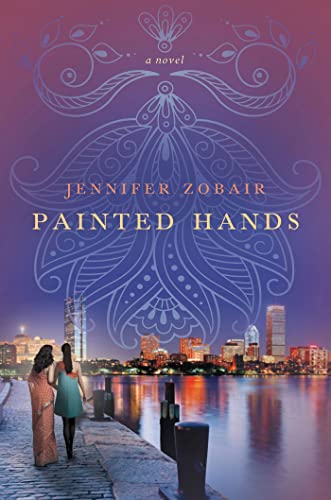 In Painted Hands we meet three old friends from Smith College who share religious and family values. Parents have educated them with the idea of preparing for careers; however, traditional expectations regarding family and child rearing are also a big part of their agenda. Each of these women experiences her own metamorphosis as the story progresses.

As this trio meets for dinner, one member, Rukan, rushes in with big news. She’s engaged! Reactions are mixed from Amra and Zainab as they learn that Rukan’s intended is a non-Muslim or kafir. This news creates tension between the friends and their families, and it is only the first in a series of issues and events that unfold throughout the story.

Amra, the second trio member, is a Columbia Law School graduate who is now in the rat race to make partner at a prominent Boston law firm. Her 90-hour work schedule keeps her from family in New York, until her mother convinces her to come home for a weekend. Amra does not realize that there is a hidden agenda: an encounter with an old family friend and eventual suitor.

With Amra’s story, we learn of the Muslim marriage customs—the mehndi ceremony (the painting of the hands and feet of the bride on the night before the wedding,) the use of colors—bright red in lieu of ivory or white for the bridal gown. Anties and other family members all have their input as they gather around the bride.

At first Amra hides the demands of her career from her potential suitor. After their courtship and marriage, defenses break down. Burning the candle at both ends no longer works as Mateen, Amra’s husband, begins to think in terms of a different family arrangement. Two people are trying to juggle not only family and career but also the beliefs that inhabit their very beings.

To much of the above, Zainab, member number three, rolls her eyes, thinking that her friend is “so 1950s” in her decisions. Zainab on the other hand is beautiful, aggressive, and totally involved in her boss’s Republican senatorial campaign. This contender is a post-feminist candidate whose positions on many issues have both liberals and conservatives in a tailspin.

Zainab sets off debate in the Muslim community for many reasons, including her associations with a certain journalist and her choice of dress. At one public service visit to a mosque (leaving her miniskirt at home), she still becomes embroiled in dialogue about whether to appear covered when in public. She grows tired of people telling her “what is good for her” and finds herself in trouble constantly as a result.

The author steers the story in an unexpected direction as Zainab spars with a neo-conservative talk show host. A clever dialogue pits Zainab against Chase Holland, her adversary. He deftly points out that by defending Muslims against stereotyping , Zainab is stereotyping conservatives.

A touching, if hidden friendship develops between these two characters, with Zainab gaining insight and Chase mellowing his stance—at his own peril. Are these characters more alike than different in their quest for human kindness? With such issues, the author truly shines, providing the right amount of empathy and balance.

Throughout, there is the theme of “tradition vs. today” taking the form of Amra’s predicaments, of Rukan’s choice of spouse and resulting consequences. We meet a troubled colleague of Amra’s who seeks to convert to Islam for her own reasons. And then there is Nadia, an author who takes liberties with her own story, rationalizing that she represents women who suffered the fates she described as her own.

While there is much information about Islam, there is little in the way of polemics. Instead the story is taut and well written, with each character going through his/her own epiphany.

This contemporary tale is reminiscent of Jumpa Lahiri’s The Namesake, which focuses on the immigrant experience and assimilation. Ms. Zobair centers her story on the dilemmas of succeeding generations. She has integrated the quandaries of young career-oriented men and women and incorporated the human values of friendship, family, and love.

Anyone who has grappled with personal traditions and found themselves in conflict with religion, family—and even with themselves—will relate to the issues that surface in this substantial and provocative work of fiction.