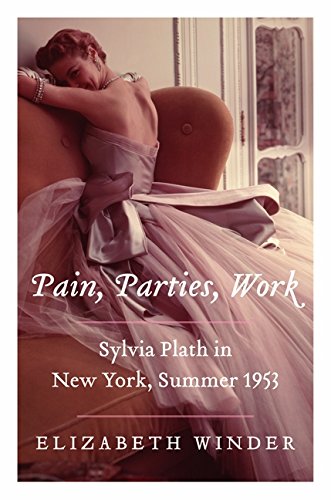 “Plath turned her ‘anger inward,’ transforming and crystalizing 30 days of pain, parties, and work into a legacy that continues to resonate.”

Most young adults undergo a coming-of-age tipping point in the course of their young lives that leaves a lasting mark on their character.

The semester abroad in Spain, the stint with Habitat for Humanity, the weeks spent volunteering for a political campaign—all might seem like pin pricks in the fabric of life but become in retrospect the moments that determine destinies. For Sylvia Plath, one such seminal moment unfolded over the course of one month in the summer of 1953—30 days that indelibly shaped Plath’s personal and professional life.

Pain, Parties, Work by Elizabeth Winder is a keen look at the time Plath spent in Manhattan for the month of June 1953. Plath had won a prestigious internship with Madomoiselle, “the intellectual fashion magazine,” joining 19 other girls to work on the magazine’s coveted annual college issue.

The magazine brought the girls to New York, housed them at the legendary Barbizon—an upscale rooming house for women whose most famous resident included Grace Kelly—and paid them an actual salary. Thousands of young college girls applied for the internship, which traded on their complex desires for careers, social mobility, and excitement.

Madomoiselle and Manhattan called for Plath the summer of her junior year at Smith College, when she was already a writer beginning to receive recognition for her work (that same year, Plath won Seventeen’s fiction writing contest) and only starting to articulate a sense of the self that would figure so prominently in her published poems and one of her most acclaimed works, The Bell Jar.

Ms. Winder frames this time as a kind of chrysalis for Plath. She makes the case that the 30 days Plath lived, worked, and experienced Manhattan left its profound imprint on the writer, one that Ms. Winder mines in order to flesh out a new image of Plath often eclipsed by the figure she cut later in life of a woman struggling with mental illness.

Ms. Winder’s Plath is sun-kissed, tanned, mouth framed in poppy-colored lipstick, a lover of crinoline and kitten heels, an astute judge of character with a weary eye toward the boys (and men) who attempted to reign in her enthusiasm and thirst for experience.

Using interviews from Plath’s contemporaries in the internship program as well as writing from Plath’s Unabridged Journals, Ms. Winder pieces together the intensity and rigor of Plath’s time in the city. Plath and her peers were given actual magazine work complete with demands, deadlines, and drudgery.

At the same time, the girls were kept on a rigorous social schedule that had them attending opera, theater, ballet, baseball games, luncheons, and fashion shoots.

Singled out for her writing abilities and taken under the wing of managing editor, Cyrilly Abels, Plath was described by others as beleaguered by the amount of work and expectations heaped upon her, which may have contributed to her first breakdown and suicide attempt weeks after her return from New York.

What gives Pain, Parties, Work additional nuance and what deepens the reader’s understanding of Plath in this particular moment of her life is Ms. Winder’s attention to the significance of the gender politics of the early 1950s.

As several of Plath’s fellow Mademoiselle interns note, young women conducted themselves with an understanding that marriage and family was the ultimate goal with a career serving a second or third priority. Friend Neva Nelson characterizes the moment: “We were all immature adolescents—products of the middle 1950s, pre-Pill, pre-Feminine Mystique—expected to do something extraordinary, but left with the ambiguity of the female role, with its stress of home and family.” Plath already felt the lure of travel (Europe) and work (writing or art) winning out over conforming to contemporary social ideals about gender, perhaps not knowing how to reconcile those desires with the realities of the day.

Perched on the lip of second-wave feminism and struggling with her own personal challenges, Plath turned her “anger inward,” transforming and crystalizing 30 days of pain, parties, and work into a legacy that continues to resonate.

Dr. Sheila Moeschen is a writer and academic whose research and writing interests include women in media, popular entertainment, and issues related to moms and caregiving. Her work has appeared in academic journals and online.