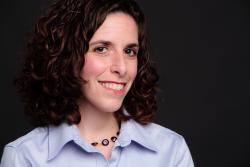 Dr. Sheila Moeschen holds an Interdisciplinary PhD
in Gender and Theater Studies from Northwestern University. She has taught at
the college level for Bentley University where she also held an appointment as
Assistant Director of the Bentley University Women’s Leadership Institute.
There she was awarded the 2008 “Woman of the Year” by the Black United Body for
her work on gender issues at the undergraduate and graduate levels.

Dr. Moeschen’s scholarly work has appeared in
journals such as Disability Studies Quarterly, Text and Performance Quarterly,
and Comparative Drama, as well as on the web. Her book Acts of Conspicuous Compassion:
Performance Culture and the American Charity Industry is forthcoming from the
University of Michigan Press.

She resides in Boston.

The Light in the Ruins

Don't Worry, It Gets Worse

Writer Alida Nugent wakes up one day to find herself prepared to tackle the world with a first rate college education from a top tier liberal arts school, but completely unprepared to take on the g

“Plath turned her ‘anger inward,’ transforming and crystalizing 30 days of pain, parties, and work into a legacy that continues to resonate.”