In Pain: A Bioethicist’s Personal Struggle with Opioids 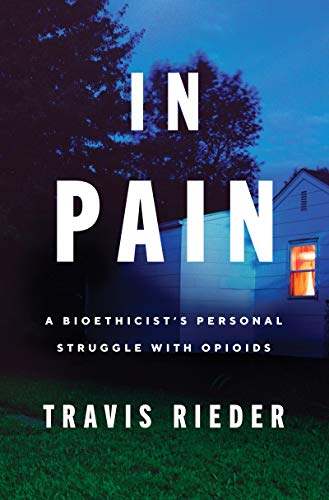 “In Pain is a fascinating and engrossing read for anybody who aspires to be an educated consumer of healthcare. But it also should be required reading for every medical student vowing to “do no harm” in a system that offers all-too-easy access to these powerful drugs.”

Shortly after Travis Rieder’s left foot was mangled in a motorcycle accident in 2015, he received his first dose of opioid painkillers. Rieder, a researcher and director of the master’s program at the Johns Hopkins Berman Institute of Bioethics, desperately needed opioids to ease his pain during his difficult recovery—but he had no idea how much of a battle he was about to face to wean himself off the drugs.

Rieder documents his accident, recovery, and withdrawal from opioids in his chilling new book, In Pain. In so doing, the author debunks the prevailing attitude that America’s opioid crisis only afflicts drug-seeking individuals with a propensity for addictive behavior.

As Rieder learned firsthand, anybody from any background can become addicted to opioids, even if they’re prescribed the drugs by doctors treating legitimate medical conditions. And the problem is not so much the effect of the opioids themselves, but rather the sheer havoc the withdrawal process wreaks on the human body—symptoms so horrifying they drive many patients right back to the painkillers, resulting in an endless cycle of addiction that many can’t break.

As it turns out, pain management is an efficient, organized process that often involves committees of specialists in hospitals who carefully monitor patients’ symptoms and their access to opioids. In his book, Rieder carefully describes how this process played out during his treatment and recovery.

But withdrawal management, he learned, is pretty much nonexistent. That was the crux of Rieder’s problem.

A few months after his accident Rieder was instructed by his orthopedic surgeon to start tapering down his daily opioid dose. Problem was, he had no idea how to go about doing that. The surgeon suggested that Rieder consult his plastic surgeon for a tapering plan, but that doctor didn’t seem to have much of a grasp of withdrawal, either. So he told Rieder to reduce his total opioid intake by 25 percent a week.

That plan, Rieder would learn later, was way too aggressive, causing flu-like symptoms that were so severe he was left shaking uncontrollably on the couch for hours at a time, crying at the drop of a hat, exhausted but too jittery to sleep. Rieder describes his withdrawal symptoms in such exquisite and painful detail that the average reader will no doubt be left dreading the prospect of ever needing opioid pain relief.

Rieder does an admirable job throughout the book explaining the role of many different constituencies in the healthcare system that share the blame for the opioid-addiction epidemic. At the beginning of the book, Rieder describes the history of opioid drug development and the crucial role the pharmaceutical industry played in pitching the drugs as safe, effective and “virtually nonaddictive” remedies for all kinds of pain.

As an ethicist, Rieder took it upon himself to investigate the moral challenges in medicine that led to his withdrawal battle. No one escapes that process unscathed—not the drug companies, not the regulatory agencies managing access to opioids, and definitely not the doctors writing the prescriptions.

What he concluded from the process was disturbing: “The doctors who prescribed my medication somehow didn’t see it as their job to help me get off that medication,” he wrote. Their job, he discovered, was managing pain—not preventing dependence or addiction.

Rieder got through his withdrawal with the support of family and friends, but in the process, he was denied help from about a dozen clinicians, many of whom had written opioid prescriptions for him.

So as he wraps up the book with some practical tips for combating the opioid crisis, it’s understandable that Rieder singles out physicians. No physician, he argues, should have the power to write names like “OxyContin” on any patient’s prescription pad unless he or she has a plan in place for helping that person taper off the drug.

Rieder’s thoughtful approach to scrutinizing the opioid epidemic is strengthened by his honest, detailed, and often cringe-inducing recounting of his own experience with the powerful painkillers. In Pain is a fascinating and engrossing read for anybody who aspires to be an educated consumer of healthcare. But it also should be required reading for every medical student vowing to “do no harm” in a system that offers all-too-easy access to these powerful drugs.