Page One: Inside The New York Times and the Future of Journalism (Participant Media Guide) 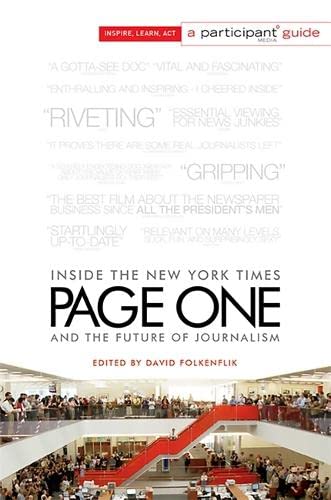 “. . . thorough, thoughtful, and exceptionally well written. . . . Page One is a most encompassing volume on the issue of the future of journalism and newspapers. . . . Highly recommended.”

Can print journalists be objective about the future of news? Page One attempts to answer this question in 17 essays and interviews with respected and well-known writers from various positions in newspaper and public affairs worldwide.

The project was originally a documentary film shown at Sundance in January 2011. At the core of the film is a story told by journalists in the business representing different generations. David Carr, a former drug addict, is out of central casting as an eccentric, old school, gravely voiced reporter. On the other side of the proverbial desk is Brian Stelter who epitomizes the model of a fresh faced, new media journalist.

The essays contained in the book cover the global challenge of how will newspapers and professional journalism survive in the age of the digital demon Websites like WikiLeaks, Gawker, Politico, and the Huffington Post.

For a reporter, a job at the New York Times equaled being admitted to Harvard University. The romance of the New York Times held forth until 2007 as things began to change. After the paper moved into its resplendent and high-tech new home across town, even the Times could no longer hold off the advance of a changing landscape and stuttering economy.

Kate Novack and Andrew Rossi created this idea for a film project. Novack and Rossi are husband-and-wife documentary filmmakers. An earlier film by this team is “Eat This New York,” about friends trying to start a restaurant in Brooklyn.

Each essay reveals, and offers solutions, to the various ailments of the newspaper business. Some take on the Internet as the insect that infected journalism and caused it to wither away.

The history of the newspaper business is filled with stories of deals gone bad, buyouts, massive firings and questionable business decisions about what is news and what people want or will read.

O’Shea calls it the “Deal from Hell,” as the arrangement emptied the Times of nearly 50 percent of its news staff and changed the editorial style from one of hard news to cotton candy.

He is emphatic that it is not the Internet that was not the cause of declining readership but the reaction of those who are in charge. O’Shea said, “The lack of investment, greed, incompetence, corruption, hypocrisy, and downright arrogance of people who put their interests ahead of the public’s,” as the reason newspapers are having problems.

Others, such as the piece by Jennifer 8. Lee, taught the paper how to embrace the electronic frontier and see it as a way to flourish as it never could before by creating a new arm for its staff to explore; the blog.

Chapter Eight by Evan Smith, former editor and president of Texas Monthly, writes about a growing anecdote to the threatened loss of real investigative journalism, which are the grant and donation supported nonprofits. These entities are creating a new business model: public news organizations.

In this chapter Smith describes these organizations as the saving credible journalism in a world of one sided and un-vetted opinion.

The mission of nonprofit and nonpartisan journalism is to disseminate the product, investigative reporting, to news agencies for free. They can afford to do this as large grants, foundations and contributions fund the newsrooms. The idea is to keep good journalism alive and good journalists employed.

The first of this new breed is ProPublica in New York followed by the Texas Tribune out of Austin and the Bay Citizen in San Francisco. It is a model being emulated around the country.

The manuscript/script is thorough, thoughtful, and exceptionally well written. Each essay offers another wrinkle in the evolutionary saga about the fate of newsprint. All of the authors, including Alan Rusbridger, Editor in Chief of The Guardian newspaper and executive editor of its sister Sunday paper, the Observer, and Hillary Clinton, U.S. Secretary of State, have something of value to bring to the story.

For those interested in the status of how news is being analyzed and delivered, Page One is a most encompassing volume on the issue of the future of journalism and newspapers.