P Is for Pterodactyl: The Worst Alphabet Book Ever 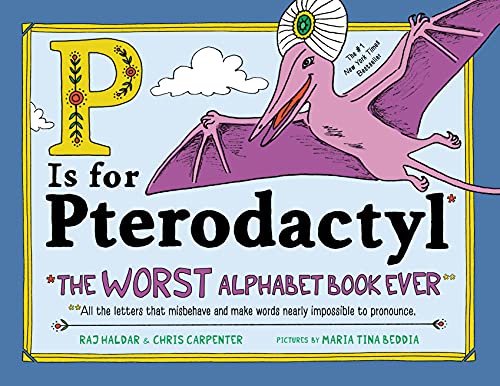 “S is for seas” is a real head-scratcher, a confusing choice since it has two “s” letters in it. The final “s” has the “z” pronunciation, so it doesn’t follow the format of the other pages, either.

“V is for five.” Now the authors are on a completely different track and going Roman, as in Roman numerals. Again, they are not following the book’s format. If adults are confused, won’t children be as well?

With eight letters of the alphabet not following the format of the book (F, I L, N R, U, V, and Y), the reader is left confused, and the reviewer is scratching her head. “F is not for photo, phlegm, phooey or photo./ I is not for eye./” How did these pages make it into this book? As for “I” there is surely a Hawaiian word that has a silent “i” in it.  How about Hawaii? “Elle is not for Elle.” As for “L” there must be a word with a silent “L.” Salmon? Almonds?

Many of the chosen words have a foreign background. It might have been nice to see the etymology of the words to understand their origins in the glossary. Jai Lai is Spanish and therefore the “J” is making the appropriate sound for a Spanish word. Quinoa follows the rules of Spanish in its sound, (Spanish is a phonetic language with very few silent letters—h). The authors might be missing the point that many of these words are borrowed from their original countries: Gnocchi (Italian), Czar, Zhivago (Russian), Jai Lai, quinoa (Spanish), tsunami (Japanese).

Ouija is a trademark of Hasbro, but spirit boards date back to the Chinese and/or Egyptians. Again, the word is from another language and culture, which is not mentioned.

Dijbouti is an African word. Bedellium is an obscure word from the Bible. I wish the authors would’ve searched longer and harder for more familiar words with silent letters (judge, lamb, bomb). True the letters are not at the beginning, so then use common nouns, not proper nouns from other countries.

The book has its fun moments and is especially strong when it sticks to the format: “K is for knight/, /W is for wren/, /X is for xylophone.” Two thirds of the book follows the format. The premise is a good one The title is a good one. The nine pages where the authors deviate from their self-imposed format are confusing. Yes, the book is an enjoyable read, but for those who like order and like the authors to stick to their own construct, it is a bit of a let down. Hopefully kids will enjoy the strange new words and won’t notice the holes.

Alphabet books are a challenge to come up with a good word for all 26 letters that fit the theme. Yes, all of these words misbehave, but in different ways. Saying “R is not for Are” has no relevance to the theme of the book. The theme would show a word with a silent “r.” The authors don’t do that. If they would’ve thought longer and stuck to their theme, they would’ve found the right word, at least for Bostonians.

Maybe this really is the worst alphabet book ever, as it says in the title.