Paula McIntyre's Down to Earth Cookbook 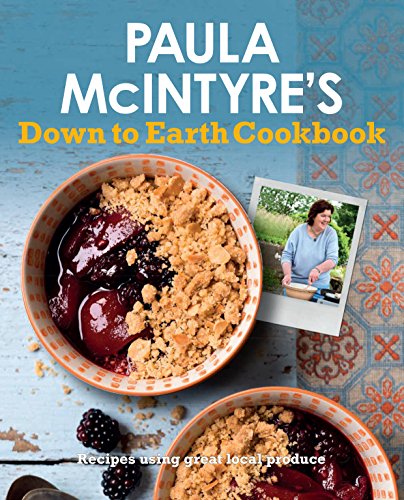 For Americans, the bar to be charmed by anything British gets set plenty low. We love the accent, the funny words, the history, the royal baby. And we used to love making fun of the food.

But now we’re charmed by the food as well—witness the current mini-craze over the “Great British Bake Off.” And with Paula McIntyre’s new book, we can be charmed by both the food and the funny words from a part of Britain we rarely associate with great food: Northern Ireland.

McIntyre’s warm, relaxed voice—heard in weekly cooking segments on the BBC’s Saturday Magazine show with John Toal (and available on podcasts)—shines through in Paula McIntyre’s Down to Earth Cookbook. Although she repeatedly refers to her “rustic” style, it’s often a fairly fancy rustic, making these flavor-layered recipes well worth a dinner party.

The book focuses on using local produce—in chapters on vegetables, fruit, meat, fish, bread, sweets, and preserving—which McIntyre pumps up with a few powerful ingredients and techniques. Her opening recipe, for a leek gratin with a crunchy topping, gently simmers the leek greens and coats them delicately with cream and thyme. That gets topped with the leeks’ white parts that have been poached, then grilled—scorched, she says—and buttery soda bread crumbs. It’s a great lesson in building flavor by enhancing the natural properties of a few ingredients.

Like many of McIntyre’s recipes, her “treacle soda farls” pose a few challenges to American cooks. The farls require a translation of “self-raising soda bread flour”—how do you substitute for that, and likely for the treacle as well? In other recipes, cooks may need to do similar sleuthing for gorse flowers, Armagh Bramley apples, green elderberries, brown lemonade, soup celery and heather ale—not to mention deducing when the many calls for cider mean something alcoholic, not the “cider” on our grocery shelves alongside the apple juice.

But quick Internet searches answer most questions and often lead to a pleasant interlude learning about five other previously unheard-of ingredients. This is a pretty book with attractive photos, but it’s not precious—so cooks may find themselves jotting a quick glossary in the back cover, to remember what castor and muscovado sugar are or what they did for that soda bread flour.

That said, it still wasn’t entirely clear how to substitute for the flour, but farls made with all-purpose flour mixed with salt and baking soda, a local farm’s thick buttermilk, and a touch of golden syrup in place of treacle were quickly devoured. At least twice, McIntyre describes a food as “scorched”—and she doesn’t mean a cooking disaster. “The smell of buttermilk and scorched flour,” she writes of farls, creates a lasting food memory—and these will become a regular memory-inspiring item on many readers’ tables.

As will many of these recipes—despite a few shortcomings. The lavender shortcakes—rich, toothsome cookies made with butter, confectioner’s sugar, and egg yolks—include no baking temperature (they were tested at 375 degrees); the meat and potato pie lacks the entire final set of instructions on putting together the pie dough and filling. Other recipes lack the sort of regimented (many would say dumbed-down) instructions American cooks have come to expect.

That makes reading through a recipe—and envisioning the steps as you go—crucial to avoiding mid-recipe frustration. But it’s worth it: cider-braised, bacon-topped turnips, blackcurrant Barbados cream (tested with blueberries), a juniper, honey and ale brine useful for many meats, oat biscuits (cookies) with whiskey-soaked raisins, and plum- and spice-steeped gin all proved worthy of a permanent place in the kitchen.

A few recipes seem a bit intimidating—carrot wine, home-brewed whin bush and hibiscus “champagne,” blackberry wine with extremely scant instructions—but they are by far the exception, and may provide a pleasantly relaxed counterpoint to our sometimes hyper-cautious food prep rules.

So indulge in some funny words and fresh takes on the food of a charming country, confident that even the slightly tricky recipes will likely turn out something truly tasty.