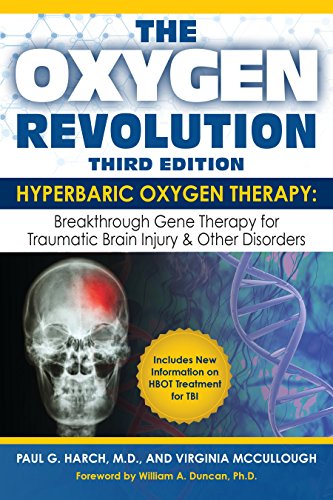 What if there were a time-tested, safe, and effective treatment for a host of congenital and acute conditions, that would speed the healing process for wounds—something so obvious that, upon being revealed, a collective “Of course!” must surely go up?

According to Dr. Paul Harch and Virginia McCullough, there is such a treatment. And according to the extensively long subtitle—Hyperbaric Oxygen Therapy, the Groundbreaking New Treatment for Stroke, Alzheimer’s, Parkinson’s, Arthritis, Autism, Learning Disabilities and More—it is effective for many of our most insidious and widespread diseases and afflictions.

Their new book, The Oxygen Revolution, details firsthand accounts of the healing and restorative effects of hyperbaric oxygen therapy (HBOT). The list of diseases and trauma that Harch contends can be treated with HBOT is extensive—so extensive that the reader could find themselves thinking that HBOT is being put forth as a panacea: good for whatever ails you.

Dr. Paul Harch’s enthusiasm for HBOT is obvious—and with good reason. During an extensive career as a physician, Harch has personally treated and documented numerous patients using HBOT. Though he is quick to point out the therapy is not a cure-all, in most of the cases he describes, there has been at least some improvement in the patients’ conditions.

While hyperbaric oxygen therapy has been around for decades, it use has been largely relegated to treating decompression sickness, or “the bends,” in divers. The therapy has seen “boom-and-bust” cycles where it has fallen in and out of favor with physicians, many of them dismissing it as “akin to snake-oil.”

In writing this book, Harch has positioned himself as a sorely needed champion of HBOT. Providing clinical evidence and numerous case studies, Harch makes a compelling argument for HBOT in treating diabetes, autism, cerebral palsy, stroke, and head injuries, among other maladies. Harch also makes the point that HBOT should be considered as an adjunctive therapy, not as something that should take the place of other treatments. Also, the therapy has few side effects if carefully monitored.

Harch urges patients to become empowered in terms of their own health care and to assist in educating doctors and insurance companies about the benefits of hyperbaric oxygen therapy. He acknowledges that HBOT has come under attack from some inside the medical community for purporting to treat a wide range of “seemingly unrelated diseases.”

Harch does a nice job of providing historical background for hyperbaric oxygen therapy, and is thorough in his references and notes on health care policies. At times, some of his anecdotal evidence seems light, and some of the patients in his case studies have made only minimal improvements. Still, to those faced with some of the debilitating conditions detailed in his book, a glimmer of hope for a better life is like a breath of fresh air.