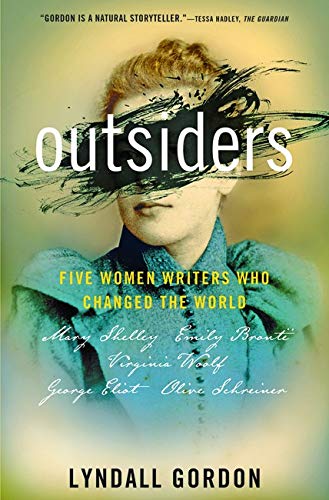 “there is much to instruct and delight in the delineation of the ways in which the lives of these unusual women are reflected in their work.”

Outsider is a substantive addition to the growing body of publications focusing on women who read/write/paint etc. though none of its subjects requires excavation from obscurity as is usually the case for this genre.

In her Foreword Lyndall Gordon explains the title Outsiders as the lens through which the five authors are analyzed, the common quality that explains their genius.

This approach is problematic in a number of ways not least because none of her main indicators of “outsider” status (motherlessness, early access to books, loss of reputation/respectability) can be applied to all five authors, as is demonstrated in her chapters respectively entitled Prodigy(Mary Shelley), Visionary (Emily Brontë), Outlaw (George Eliot), Orator (Olive Schreiner), and Explorer (Virginia Woolf).

Each of her chosen authors led unconventional lives and defied many of the gender norms of their day but several at the same time were consummate “insiders” for some or all of their lives. It is not “improbable,” despite what Gordon writes, that Mary Godwin met the poet Shelley as he came to the family home driven by his admiration for the work of her mother, the famous feminist Mary Wollstonecraft.

Henry James sought out George Elliot as a national treasure when he first came to England. And Virginia Woolf, daughter of Sir Lesley Stephen, was invited to lecture at Cambridge where all the men of her family were educated, despite the fact that she had no formal education. We could go on! Having set up this restrictive conceptual frame Gordon is frequently obliged to contradict herself.

Perhaps it would be more accurate to say that their genius and their commitment to expressing it set them apart and made them outsiders in positive as well as negative senses.

Interestingly enough Virginia Woolf positioned herself in a specific political sense as an Outsider and as as a member of the Outsiders Society, an organization of women who worked for liberty, equality, and peace by their own methods, resisting “the militancy and imitation of men.”

She was famously not interested in the Vote, nor an admirer of the Suffragettes. Gordon appears in her closing paragraphs to endorse this rather unfashionable view of the special strength in the apartness of women, which has yet to be realized. Woolf’s own view of genius . . . specifically of the Shelleys and the Brontës . . . is that it is inexplicable! There is no way that we can explain “the germ of genius” though “being open to workers,” reading, listening, and discussion all help.

As all of these women have been much written about elsewhere—in particular Virginia Woolf, George Elliot, and Emily Brontë (often as a package with her sisters Charlotte, and Anne)—one must ask what new insights have been gained by applying this particular analytical framework to gather them within one cover? And are these the right five if we must choose? Emily Dickenson and Jane Austen have frequent walk-on parts, particularly the former who is extensively inserted into the chapters on Emily Brontë and George Eliot to extrapolate insights where material is scarce.

Setting aside the constraints of Gordon’s conceptual framework there is much to instruct and delight in the delineation of the ways in which the lives of these unusual women are reflected in their work. Perhaps in the relative absence of strong female role models—though Mary Wollstonecraft looms overall—relationships with fathers, brothers, husbands and lovers (some of whom were also colleagues and agents) . . . were especially important in positive as well as negative ways. Shelley’s surprising domestic arrangements are explored in detail and Frankenstein is said to have been inspired inter alia by Mary’s unresolved estrangement from her beloved father, consequent on her fidelity to a life with Shelley.

George Eliot’s father was so concerned by her single state that he moved house at considerable expense so that she could find a husband. The move met with only moderate success.

And one of the most touching relationships described is that between the “Woolves,” Virginia and Leonard, who talked to each other through their fiction, though none of his novels are remembered.

Surprisingly Gordon does not include in her review Woolf’s “gender-bending” novel Orlando, inspired by her relationship with Vita Sackville-West, and now perhaps the most read and filmed of her works. Tellingly, this and other well-publicized lesbian attachments did not make her an “outsider” in Gordon’s sense of the term thanks to her secure status in the British class system, and a husband who stood by her or did not notice.

In fact Gordon could with profit have expanded upon the tantalizing glimpses throughout of class and politics, and the smallness and interconnectedness of the intelligentsia centred on Oxbridge and London; though this would not have demonstrated her Outsider framework.

The edited version will no doubt take care of meandering and ungrammatical paragraphs and some oddly demotic usages (“a thick John Bull; “far-out Virginia ”). It could also be a good idea to reconsider the aesthetic appeal of, and the message sent by, the cover, which depicts a woman in vaguely 19th century sleeves with her face scribbled out. These five women were never scribbled out in their lifetimes or since.