Outside Looking In: A Novel 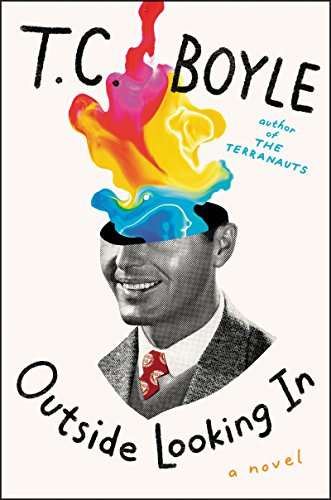 “a narrative that reminds its readers of the extent to which everyone who came after the LSD experiments, and the psychedelic sixties, is drawn to that story, but forever remains outside it.”

In T. C. Boyle’s latest novel (his 18th), two of his fascinations intersect: addiction and collective living. Outside Looking In begins in Basel, Switzerland, in 1943, with the synthesis of lysergic acid diethylamide-25. When animal tests prove unilluminating, chemist Albert Hoffman decides to try his latest creation himself. His behavior through that test terrifies his lab assistant, but Hoffman is elated in the aftermath: “I experienced things . . . I’d never thought possible—saw things, saw whether my eyes were open or shut, a whole kaleidoscope of swirling images and colors, and that was only the beginning.” He has created LSD (acid), the most influential psychoactive drug of the 20th century.

Nineteen years later, LSD lurks behind the psilocybin experiments being conducted at Harvard by charismatic visiting processor Timothy Leary. Graduate student Fitzhugh Loney wants desperately to be part of Leary’s “inner circle.” He sees them as innovators offering a path to academic success. But the doorway in is through the doors of perception. (Aldous Huxley lurks just outside the novel. His death is as monumental as JFK’s for these characters.)

Fitz and his wife Joanie come to Leary’s rented home in Cambridge, MA, where they meet poised, bohemian insiders and mingle with jazz musicians, and as new members of “The Oroject,” take first psilocybin, then later LSD. Fitz is delighted to be “in;” Joanie is elated, seduced, and desperate not to be excluded from any “sacrament” to come.

While the Loneys are fictitious, most of the book is based on Leary’s “acid trials” between 1962 and 1964. The group begins in Cambridge, spends two summers in Mexico, then retreats to a mansion-cum-commune in Millbrook, New York. It’s clear almost from the outset that the project has only the thinnest of scientific veneers. The researchers are the participants, and the research “material” is self-reported, never to be compiled. The professors, artists, and graduate students involved may begin with scientific aspirations, but soon their focus is on mind-expansion, not systemic study.

As an introduction to Timothy Leary, Outside Looking In is vivid and engaging. (Leary became a major figure in the 1960s counterculture. He was an evangelist for LSD and popularized the slogan, “Tune in, turn on, and drop out.” Following his dismissal from Harvard in 1963, Leary never returned to academia.) Boyle’s Leary is as enigmatic as he is charismatic. Yet he appears in the novel as an academic and parent as well as a drug guru. His two children appear regularly, orbiting the increasingly orgiastic scene with serenity.

The bulk of the novel is told from Fitz Loney’s perspective, and Fitz is surely the origin of the title. He is a perpetual outsider, aware of his humble origins and desperate first for academic recognition, then for Leary’s recognition. Even as he becomes part of the inner circle, though, Fitz consistently fails to hold Leary’s attention. Leary’s attention is elsewhere, on sex, drugs, and his own fame.

Leary makes an uncomfortable love object. He’s a chemical explorer, not a nurturer, and the group’s affection for him is unreturned. The house at Millbrook takes on aspects of a cult, but the cult has no leader. Fitz becomes increasingly aware that Leary will “abandon” them in favor of a new romance and international travels. When Joanie and their son leave Millbrook, the loss barely signifies to Fitz, compared with the loss of his idol.

Boyle’s prose style is utterly transparent and intensely readable. Its accessibility is usually appealing and only occasionally a fault (acid trips can’t really be captured without at least some verbal gymnastics, which Boyce eschews). The emotional layers of the novel are likewise unremarked. Most of the feeling comes from Fitz’s anxieties and failures to connect, either with Leary or with Lori, a gamine, next-generation Leary follower.

If the book could be improved, it would be by abandoning Fitz’ perspective for the final section. Joanie carries the middle narrative; Lori could easily carry the ending. Women appear in this book largely as sex objects and encumbrances. Given that this is how Fitz (and Leary, implicitly) perceive them, it isn’t surprising, but Fitz’s own failures aren’t necessary to the novel’s plot. The group will end, as inevitably as history, and Lori, the Plath-quoting runaway coed, is really the embodiment of that collapse. Allowing her to carry the story would give it an additional layer of complexity.

There’s little that’s new in Outside Looking In. It’s not a book intended to bring new insights to this period of American drug history. Rather, it’s a narrative that reminds its readers of the extent to which everyone who came after the LSD experiments, and the psychedelic sixties, is drawn to that story, but forever remains outside it.