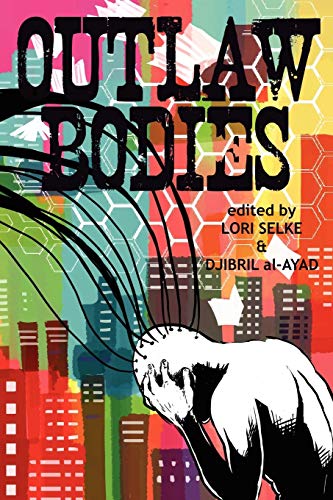 Some publishers, while not necessarily better than others, are certainly different. The Future Fire publishes an online magazine of speculative fiction with a bit more focus on social issues and a bit more political awareness than you see in most sci-fi and fantasy mags. That's why when they bring out an anthology with the title Outlaw Bodies you might expect it to be just a little more interesting than the run-of-the-mill.

As Lori Selke promises in her introduction, “In this anthology, you will find artists, mothers, and academics; bodies constructed of flesh and of bone, of paper and metal and plastic. Bodies formed of bouncing, buzzing electrons, waves and particles of light. Bodies grown and bodies sewn, glued, folded and sutured. And all of them standing in defiance of the rules and regulations designed to bind them.”

And that's exactly what we get.

Jo Thomas, in “Good Form,” handles the relationship between a new-made android and its test engineer; Vylar Kaftan no doubt touches a nerve with many parents in “She Called Me Baby,” in which a young woman pursues a determined series of body modifications that make navel piercing seem tame—all in the name of being different from her mother.

Anna Caro's “Millie” is a touching coming-of-age story of a girl with severe disability, except this is set in a future where such things are not quite the impediment to a normal life they once were.

If you're a teenage misfit who finds happiness on the surface of a poisonous post-apocalyptic Earth; if you're a man, unsure of himself in a world where men won the battle of the sexes, who finds comfort in a paper wife; even if you are Frankenstein's monster, dealing with the modern health system as your stitches unravel, your proper place is in this anthology.

Yet the anthology is not all about misfits and freaks.

Portuguese writer and academic Fabio Fernandes gives us a story about connected and unconnected identity in a world of ubiquitous networks. Science fiction fans will love the embedded references.

In fact, all the stories in this anthology have something to interest or delight, taking the theme into all kinds of fascinating worlds and situations, and the quality is solid, rising to high in places . . . except in one single case.

Considering how good many of the other pieces in this anthology are, the inclusion of this one is a jarringly odd choice. It does a great disservice to the other authors to have this piece alongside their work.

“Mouth” aside, Outlaw Bodies is a fine sci-fi/fantasy anthology from The Future Fire with a most readable standard of contribution and one or two quite excellent stories.