Out of the Shadows: Six Visionary Victorian Women in Search of a Public Voice 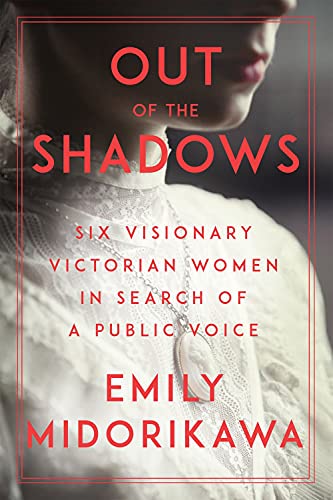 In her enthralling book Emily Midorikawa tells the stories of women, many from modest backgrounds in the US and the UK, who parlayed their alleged communications with the spirit world into social, economic, and political power normally closed to them by their gender among other flaws.

The first chapter is dedicated to the three Fox sisters of Wayne County, New York state—Leah, Maggie, and Kate—who form a running thread throughout the book. In the penultimate chapter Maggie reveals the banal secret of the spirits’ knocking and tapping which had been the sister’s hallmark, though this revelation seems to have discredited her, rather than the phenomenon itself. And indeed, she later resumes her old habits of mediumship.

London-born Emma Hardinge Britten was a slow convert to this “Yankee disease,” finally succumbing in 1856 when she recalled in detail the sinking of the SS Pacific en route from Liverpool to New York, before the disaster became public knowledge. Her spirit contacts not only brought Emma great gifts of musicianship, but also helped her to speak out in the feminist cause. She became such a celebrity that she was also asked to name babies, to officiate at funerals, and to visit condemned men in their cells. She was, “almost like a male member of the clergy” though she was critical of organized religion. Emma practiced mostly in the US, and such was her renown that she was chosen to give the oration at the funeral of Abraham Lincoln. Later in her career Emma attempted to define her craft, Modern Spiritualism, in both rational and religious terms.

The fifth visionary, Victoria Woodhull, hailed from rural Ohio, and her canny management of her gifts as a spiritual healer and successful predictor of the future, particularly in relation to the stock exchange, enabled her to establish a brokerage  office on Wall Street, and later to become the first female candidate for the US Presidency.

The remaining “voice” belongs to Georgina Weldon, “born to a minor member of Britain’s landed gentry” and educated as a lady by a stream of governesses. Georgina (nevertheless) yearned for a career on the stage, but eventually took up spiritualism using her powerful gifts to campaign for Lunacy Law Reform, and against “mad doctors” for their easy assignment of inconvenient women, including herself, to mental institutions. Georgina showed great innovation in publicizing her causes, and though imprisoned twice for her views was a formidable litigator.

Midorikawa has assembled and analyzed an impressive range and variety of sources in building her biographies, but also in delineating the social, scientific and political changes that formed their backdrop. This was an era of rapid scientific changes bewildering to most people, as well as a time when the rumblings of the feminist movement in both US and UK were attracting more general attention. The latter and its relationship to the anti-slavery movement could have been further elaborated.

Overall, however, this is a thrilling read, striking inter alia for the nonchalance with which these female Victorian visionaries took on the rigours of transatlantic travel, and for the incidental intertwining of their remarkable lives.