Out of the Mountains: The Coming Age of the Urban Guerrilla 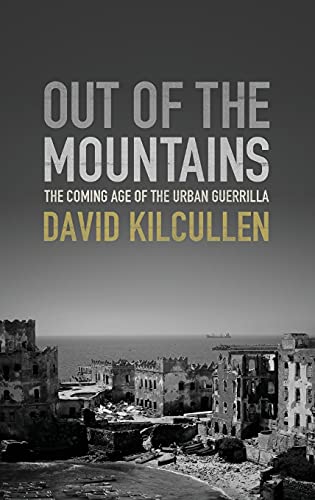 “[Dr. Kilcullen] should be regarded as the foremost thinker of his generation on the topic of warfare.”

In the parlance of the U.S. Army, Dr. David Kilcullen's new book Out of the Mountains is commendably "high speed, low drag." In addition to its brisk pace, organization and effective writing, it is also a positively provocative and cogent work of depth that describes a projection of future conflict that is grim, gritty, and one for which all governments need to be far better prepared.

The book's evocative title itself is an attempt to encourage thinking about conflict and to move it onward from the past ten years. This means not ignoring lessons learned from the past but to literally move our concept of conflict out of the mountains (of Afghanistan, for example) and into new environments, where conflict is occurring and is likely to occur in the future.

While the U.S. and NATO militaries have been focused on counterinsurgency, particularly in land-locked areas, conflict and methods through which conflict is prosecuted have evolved significantly. Indeed, during the period Afghanistan and Iraq occupied the U.S. military's attention, the world has changed in important and dramatic ways.

For example, although the U.S. played a role in the Libyan portion of the Arab spring, that movement continues to play out with critical repercussions as consistently, and tragically, demonstrated by events in Syria.

In the case of Dr. Kilcullen's work, four of the most significant changes and projected trends are discussed at great length and provide the substance of chapters one and two. These trends are a significant increase in the world's population (up to approximately 9.1 billion by 2050), increased urbanization of populations, increased connectivity between populations, and the effects brought about by mega cities, such as greater New York City-Newark or Tokyo, being located along coasts (littoralization).

These four trends, and how conflict occurs in them and is shaped by them, are presented through numerous case studies. For example, Dr. Kilcullen uses the case of the terrorist group Lashkar-e-Taiba (LeT), who literally attacked the city of Mumbai in November 2008, as an illustration of manipulating traffic flow in order to successfully infiltrate, and then assault, important locations.

In the same case, LeT's actions in the event were enabled by capabilities and connectivity (of communications for example) that previously belonged primarily to nation-states.

Another case study is that of the city of San Pedro Sula, Honduras, which is discussed as an example of a violent ecosystem. In this case, the inflows of M13 and 18th Street gang members who are deported back to the city from the United States, along with other multiple factors, such as San Pedro Sula's coastal location and its increasing size, make it a prime example of Dr. Kilcullen's examination of what urban conflict may consist of and how it will occur.

Examinations of Brazilian favelas (slums), criminal organizations in Kingston, Jamaica's garrison communities, and multiple other case studies are important and indicative of the book's many strengths.

In other words, Dr. Kilcullen does not just present theory, he puts it in context of real-world examples that make his ideas easy to follow and add range and insight to enliven his depiction of future conflict. Further, the case studies themselves serve as springboards to larger and well-supported conclusions.

One such outcome, and the book's centerpiece, is what Dr. Kilcullen terms "The Theory of Competitive Control." Out of a total of five chapters, along with a very useful appendix, an explanation of this "theory" is the focus of chapter three.

Briefly, Dr. Kilcullen's theory of competitive control is rooted in the concept of social normative systems. While not simple, normative systems are social constructs in which populations gain a sense of security and predictability that functions to varying degrees with regard to services provided.

The use of traffic lights, road rules, and law enforcement of a typical city is one simple example of such a system; they become much more complex when multiple such 'systems' are compounded in a society.

These normative systems are potentially manipulated, or in stable societies, maintained by rule of law and supported through law enforcement. In cases where such systems are manipulated by criminal organizations, or even terrorist elements (such as Hezbollah in Lebanon), physical coercion is often required to maintain the system when other persuasive means fail.

When organizations provide nothing but extortion and fear to a society (as in the more extreme case of Al-Qaida in Iraq prior to the Arab Awakening), the range and spectrum of what may be provided is relatively narrow. On the other hand, when populations comply with a system, a wider range of services may be provided that require less coercive practices to enforce the rules.

This range of wide to narrow normative systems of a specific society in question has important implications. It often demonstrates how much control a group (whether it is a government or non-state actor) may or may not have, over that society.

Obviously, Dr. Kilcullen provides a much more detailed and refined explanation. Moreover, his theory demands careful reading and is, in no way, simple. Most importantly, it is highly relevant to projections of how future conflict will look as the world enters mid-century and is thoroughly supported through extensive research and ample evidence.

Certainly, these are complex ideas and are only briefly touched upon here, but Dr. Kilcullen deftly examines the subject in detail and argues that the "Theory of Competitive Control" really lies at the heart of future conflict. Similarly, any specific city's context and situation, such as its location and vulnerability to natural disaster, also play an important part in determining the vulnerability of populations to control.

Thus organizations, whether they are state or non-state actors, which successfully provide stability and predictability, have a greater chance of achieving such control while others, of course, may have far less success. Failure to provide stability (as well as fairness), of course, is just one of the reasons why so many governments in the Arab spring have faltered.

Other factors include a city's resilience and ability to absorb swelling populations. Ultimately, all these factors are affected and determined by the four mega trends discussed earlier. For this reviewer's money, chapter three, which explains this theory in detail, is itself worth the price of the book.

Moving from those details, a consistent strength of Dr. Kilcullen's previous publications, as well as with this new effort, is his inclusivity. Certainly, he writes primarily for national security professionals and military audiences, but his manner and style of presentation make his ideas accessible to general readers as well. In this manner, his writing evokes the spirit, as well as the intellectual acumen, of Bernard Fall, who was arguably the most prescient of analysts during the early Vietnam War era.

For readers familiar with Dr. Kilcullen's previous publications, The Accidental Guerrilla and Counterinsurgency, Out of the Mountains is a logical and expansive progression from these efforts. It is also a welcome evolution of his thoughts regarding conflict—especially what conflict might look like in a few short decades.

Readers unfamiliar with Dr. Kilcullen's efforts, however, would do well to begin with his previous work and then continue with Out of the Mountains. Doing so will provide a greater perspective on the thoughts of a writer who, unequivocally, should be regarded as the foremost thinker of his generation on the topic of warfare.