Out of Many Faiths: Religious Diversity and the American Promise (Our Compelling Interests) 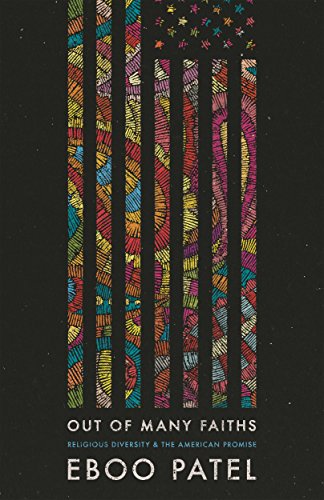 “Out of Many Faiths is an important read for anyone hoping to understand factors causing the increased discrimination non-white groups and minority religions are suffering in our nation today . . .”

Out of Many Faiths arose as the result of an invitation to Eboo Patel to serve as the principal author of the volume on religion in a book series called Our Compelling Interests: The Value of Diversity for Democracy and a Prosperous Society. Patel admits that he was not altogether ready to write a new book so close on the heels of his last one, but he accepted because he was inspired by the mission of this series: to help America positively engage the challenges and opportunities of our growing American diversity.

That Out of Many Faiths resulted from an invitation as opposed to a driving force arising out of the author’s heart in no way detracts from the poignancy of its message. Patel structures his contribution by using Islam, his own personal religious affiliation, as a window through which to examine broader themes about America and religious diversity.

In earlier times Mormons, Catholics, and Jews have all struggled for acceptance into the American religious landscape. Patel compares and contrasts the experiences of these other faiths throughout American history to Islam, and claims the challenges Muslims face now in the US currently raise the most salient questions about American values and identity. He further projects that in coming decades Hindus, Buddhists, or even atheists may become the focus of such controversy.

Patel discusses at length how what he calls an Islamophobia “industry” in the White House and elsewhere is causing diverse subgroups of US Muslims to band together in defense. A similar phenomenon arose in history in the case of Jews, as described in Chaim Potok’s novel The Chosen, which Patel had read as a youth.

His chapter on the Trump White House depresses the reader sufficiently to almost discourage further reading, but the chapters following it offer considerably more hope.

Historically once Mormons, Catholics, and Jews were “absorbed into the national DNA,” the notion of a Judeo-Christian “civil religion” arose in the US. Our civil religion has managed for some time to provide a narrative that allows Americans from a range of backgrounds to feel something sacred in our common American-ness. Now that members of other religions from other cultures are increasing in number, Patel advances the idea of a new, broader civil religion that embraces pluralism. He advocates expanding our national narrative to include all comers.

Out of Many Faiths is basically an exploration on Patel’s part of how we in the US can create “a wider sense of ‘we’” that will supersede our recent nationalist tendencies and include the many elements that make up our national melting pot.

Three respondents provide commentaries that serve as criticism of Patel’s assertions. Robert P. Jones complains that there is no way to include Islam, Buddhism, etc. into a civil religion called Judeo-Christianity. He cites what he calls “the three Ds” as engines that are inevitably changing the religious landscape in America: demographic change (increased immigration, especially from Hispanic countries,) declining birth rates (among white Christian Americans,) and disaffiliation (referring to the rapidly growing number of religiously unaffiliated, especially among young adults.)

Rather than rely upon a civil religion called Judeo-Christianity or any modification thereof that could include Muslims et al, Jones advocates instead taking inspiration from the “civic creed” upon which our nation was founded. Referencing G. K. Chesterton’s What I Saw in America, Jones calls us to focus on concepts located in the founding “sacred texts” of our nation: that “all men are equal in their claim to justice, [and] that governments exist to give them that justice.” The Declaration of Independence and the Constitution aspired to create a nation out of vagabonds and exiles by uniting them “by voluntary assent to creedal political beliefs such as the equality of all people.”

Respondent John Inazu challenges Patel on two points. He claims Patel has been too optimistic about what we in this country hold in common with one another. He also claims that basic legal protections regarding the right of assembly and others must be strengthened and honored.

Respondent Laurie L Patton pleads for our need of a new set of myths for plural America. Her commentary explores the factors that would have to go into new national myths, begging that they focus on the interdependence among our various religions and provides examples of small stories that begin to approach that ideal.