Out of Love: A Novel 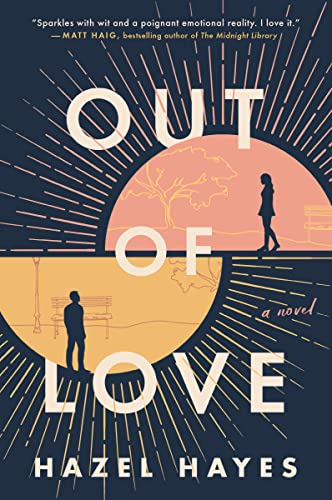 “The nuances of human behavior are on display, and we can all see something of ourselves and our own mistakes.”

Knowing how a story ends before it even begins is often a let-down, but it can increase the tension and arouse curiosity. Think of the film American Beauty in which Kevin Spacey announces it’s the last day of his life at the very start. Most movie-goers were dying to learn the events leading up to his death.

But that was a murder. Love stories are different. There is a wistful quality when one knows a relationship does not work out. Where did it go wrong? Whose fault was it? Was she too needy? Was he too controlling?

So it is with Out of Love, which crackles with wit and sharp observations by writer Helen Hayes, a former horror screenwriter and director who decided to tackle a love story because, we’re told, “she can think of nothing more horrific than love.”

From nearly the first page, which is the end of the relationship between Theo and the female narrator, Hayes is dead-on with her observations. “He moved most of his stuff out of our apartment while I was home in Dublin, crying on my mother’s sofa. He stopped loving me a long time ago but wasn’t brave enough to tell me,” she writes. “And so our relationship kept trundling forward like a wagon down a dirt road, with me tied to the back like a rag doll.”

Traveling backward in time allows the reader to be all-knowing, to see the missteps and all the little misunderstandings the lovers make that lead to the point where neither can stand the other. Oftentimes it’s heartbreaking because those involved are unable to see their own mistakes in real time.

There’s a moment after this couple has broken up temporarily when boyfriend Theo asks for a meeting. It seems he’s going to lay his cards on the table—or that’s what the narrator believes. In her mind, she builds up the meeting, three weeks into the future.

It’s a pivotal scene that many a woman will undoubtedly relate to. The narrator is mixed about seeing Theo again but, when she commits, she does her best. She arrives early at the restaurant, wearing “a pretty orange party dress.” Will he want another chance, she muses, and even more importantly, she will give him that chance or make him grovel or reject him entirely?

“The part of me that still held hope of reconciliation swelled in size, and I decided, then and there, that if he wanted to try again, I would . . . whatever he needed, I would give it to him. Because I loved him. And I wanted to make this work,” she writes.

“I’d spent three weeks waiting for this. I had lived those weeks,” she writes. “I had sat inside each minute and felt the weight of it on me. And he didn’t even bother to wash himself, or to put some fucking trousers on.”

Some have compared this book to Normal People by Sally Rooney, but that’s probably because both writers are Irish and writing about coupling. The truth is the novels couldn’t be more different in tone. Normal People is dead serious while Out of Love is often laugh-out-loud funny.

There is a near constant acknowledgment by the narrator that the worse she feels, the better she looks because she is losing weight and working on herself. The narrator is a writer, and her editor tells her at a lunch meeting that she’s looking quite well.

“Thanks,” our protagonist says, “It’s this new thing I’m trying where I don’t eat or sleep or think about anything other than the fact that I’m a struggling writer on the cusp of thirty with no partner, no kids, and no fucking clue what I’m doing.”
“Well, I must say, it suits you.”

As the novel progresses, the two main characters grow more and more loving and likeable until you’re horribly sorry that it doesn’t work out. This type of storytelling is not for everyone. It has its drawbacks, but in the hands of a writer as talented as Hayes, it works. The nuances of human behavior are on display, and we can all see something of ourselves and our own mistakes.