Out of a Jar 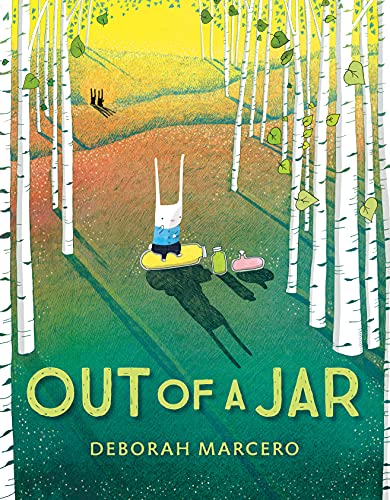 Illustrations make Out of a Jar sparkle and shine. But is that enough to make it a must-have read?

Llewellyn is an emotionally complex little bunny. He loves to engage in the world around him, but he doesn’t always appreciate the feelings that come from the experiences he has. Scary books, scary jokes, and scary cartoons are top on his list of favorite things, but being scared is terrible.

Feeling fear is not something Llewellyn wants to do, so he takes that feeling and tries to put it somewhere else, anywhere, as long as it’s not inside of himself. He ends up shoving fear inside a jar and shoving that jar in the basement closet. Out of sight, out of mind.

Fear, the character, is a black blob rendered as a cross between a spider web and an amoeba. It has tentacles, or roots, that look like they could latch on to something and immobilize it. Its eyes give it life and expression, which are tricky to read, adding to the fear factor. Confined to its glass jar, fear itself looks afraid. Do we sense a twinge of compassion for our little antagonist: fear—locked in a jar, imprisoned in a closet?

Having done it once, Llewellyn finds it easier to do it again. Sadness, this time a blue amoeba blob, gets caught in a jar and stored next to fear in the closet. Excitement (yellow), anger (red), loneliness (blue), joy (purple), disappointment (green), all of them a specific color of emotion, locked away. The result? “Llewellyn walked around not feeling much of anything at all.” Although that’s not exactly true.

He feels inspired. Then he feels embarrassed. When he goes to shove the huge jar of orange embarrassment into the closet, he feels frustrated that the closet is full and the embarrassment jar doesn’t fit. Contrary to what Marcero writes, all the while, though, Llewellyn is still feeling. He is feeling so much frustration that the energy of his emotion cracks open all the jars and they come tumbling out of the closet in one giant primary color mess on the floor. Symbolically, black fear is the last to leave.

The lesson Llewellyn learns is that it is okay to feel. Feelings don’t have to be isolated. They can be intermingled and juxtaposed. This, framed in yet another emotion, is felt by Llewellyn as relief. He no longer needs to judge his emotions. He can actually “feel” them, “hug” them, and let them go. Phew. Off he goes into the sunset with his friends by his side. A happy ending? Not really.

In a picture book market that is glutted with books about emotions, this is a tough tough sell. Most of them smack of cheesy sentimentality and morality high grounds telling us that it’s all okay. Most of them leave out the part about emotions that deals with their origins of misperception and delusional ego interpretations, eschewing the lesson that it’s how we think about things that matters. If one could see things differently to begin with, that would prevent the emotion from oozing uncontrollable in the first place. Out of a Jar, sadly, is no different.

Assuming that it would be too complicated to teach an esoteric concept (or tell an esoteric story)—the origins of emotions—to children (or to fictional bunnies) is fundamentally false. If children can believe that an emotion can be put into a jar, a pretty far-fetched idea, then they can believe they have power over the emotion in the first place. They have the power to reinterpret. Why not teach them that power instead?

What does it mean, exactly, to put an emotion somewhere? Whether fearfully hiding it in a jar, or lovingly hugging it and letting it go, both miss the mark in telling the truth about emotions. Both leave the feeling person misunderstood, disempowered, and even more vulnerable. Even the color matching is misunderstood here and not taken from color theory or psychology. Unhelpful in the core-of-emotions department for the reader, but at least dramatic to watch in a little fictional bunny.

Story wise, Out of a Jar is not very unique. The pictures, however, are silly and fun. After all, who wouldn’t like to give anger a kick in the pants every now and then? Or watch a bunny, the most quintessentially unemotional critter there is, interact with a colorful crew of emotional expressions. If not taken too seriously, it could even be entertaining.