Out East: Memoir of a Montauk Summer 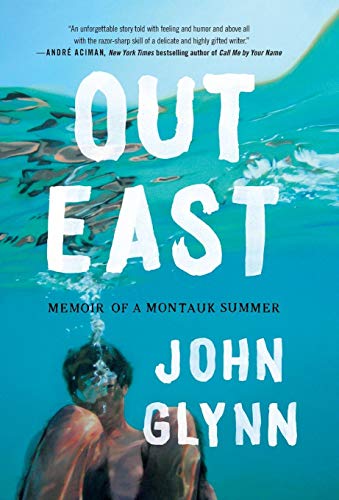 “Read Out East to remember what it was like: the sad, tragic, emotionally turbulent truth of first love. And then stay for the prose. For the beautiful, beautiful prose.”

Read John Glynn’s Out East when you can’t remember what it felt like to fall in love for the first time. Were you that gullible? That ridiculous and desperate to belong? Could you possibly have been that raw and broken, mostly out of blind youth? Yes. Yes, yes, and yes.

Though ostensibly a coming-out story, Out East is really, mostly, a coming-of-age one. A memoir about the end of innocence in the form of exposure to the outside world, meaning exposure to the people in it who will choose not to love us in return, breaking our hearts and sense of self, forcing us to rebuild it, or as in John Glynn’s case, to build it for the first time, as a gay man.

“I knew what this was. I knew it by name. I’d thought I had experienced it before, but I hadn’t—at least not in such a rich swirl of colors and tones, shades and nuances. Not with the same depth and intensity. Not in its true form. This was what my parents talked about. I was falling for someone.”

Out East is about falling in love with love, with friends, the world, strangers, as we do when not yet jaded and self-protecting (though that does come later). It is also about what love does to us.

Like a true innocent, Glynn tells us about every friend (all 31 of them) because every friend is important, or will be important, or will happen to be there for each small event on the road to heartbreak and pained discovery. Like your best friend at the time of your own coming of age, he tells you what he said to Matt, and what Matt said to him, and what he was listening to when he cried his eyes out because of what Matt said. He does that because it’s what it was like, and if you don’t remember, then maybe you should.

“Matt looked up from my shoulder. We started leaning in. Our foreheads touched. I closed my eyes. We were on the verge of kissing. I had envisioned this countless times, had prayed for it each morning on my walk to the subway. We were as still as Roman statues. We did not speak. I was about to lean in. Then the thought. He was drunk and had a boyfriend. I’d be his point of guilt. I wanted to kiss him more than anything. But I knew that this was not the time. This was not the way.”

It’s true that, at times, there is a triviality and a repetitiveness to the narrative of what Mike, Evan and Shane and Ashley drank and wore and said and danced to. But, here’s the thing: John Glynn can write. He can write the heck out of a page, making a common timeshare in Montauk read like the magical space in which all tragic love stories should take place, made all the more beautiful by virtue of being doomed from the start.

And then there’s the honesty. He doesn’t hold back even when what he tells makes him out to have been the emotional age of a twelve year old . . . in his twenties. He doesn’t overwrite his idyllic childhood—the only traumatic events, seemingly, his grandmother’s death from old age, and the fact that he is an only child—to make his account weigh more than it did.

Even the scene showing his coming out to his parents reads like the dream scenario of every person who believes love is love and should be protected and validated. And it goes similarly with friends and family, making the point, perhaps the deepest of all the thoughts in the book, that the trouble, the only trouble, was John Glynn needing to decide (after a scary life-threatening event) what he was willing to risk to be who he is and love who he loves. The way in in which that decision plays out, addresses the crucial question of whether it is ultimately love, or whether it is pain, that saves us, reunites us with ourselves.

And so, as coming-out and coming-of-age stories go, this one is subtle, and that restraint may be its virtue. No. Scratch that. Let’s say it this way: Read Out East to remember what it was like: the sad, tragic, emotionally turbulent truth of first love. And then stay for the prose. For the beautiful, beautiful prose.