Out of the Desert: A Novel 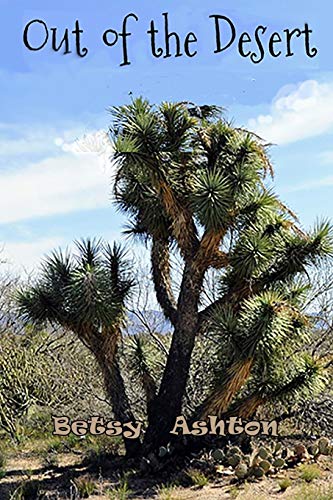 “The novel succeeds on Ashton’s ability to create characters who are dynamic and capable of change, and through her capacity to create a rapid-fire series of episodes that draw the reader into this saga-like novel.”

“Todd’s visit to the Homestead, empty of his long-time best friends, filled him with longing. If this was part of growing up, losing almost everyone and everything that was anchoring him to his past, he wanted none of it.”

How do people survive the loss of parents, bullying, parental abuse, and lifestyles that don’t conform to traditional norms? Betsy Ashton’s new novel explores those questions with compassion and the willingness to see people as multifaceted.

Todd Mathieson, haunted by the struggles of his younger brother Jimmy, returns to the family home in search of missing pieces of his past. So begins Betsy Ashton’s mini-saga of an American family beset by a roller-coaster ride of highs and lows as family secrets are revealed and as Todd goes about restructuring his life.

The action centers on the interlocking relationships between two families, the Mathiesons and the Andersons, most of it occurring in a California high desert town of Victorville near George Air Force Base. In an extended flashback, Wallace and Alicia Mathieson have arrived, relocated by the Air Force to arid southeast California to live on the property he’s inherited from his father. The Andersons, another military family, also recently re-assigned to the air base move in shortly thereafter.

Wallace and Alicia Mathieson have adapted to their new lives in a compound of two small buildings and an Airstream trailer they refer to as “The Homestead.” Their sons, Todd (Toad) and Jimmy (Cricket) get along beautifully, and things get even better when Polly and Grant Anderson move to Victorville.

All is peaceful until Wallace’s sister Suzanne and her husband and two children arrive and demand to share the tight quarters with the Mathiesons, who grudgingly agree to house them temporarily. Their arrival is a catalyst for the conflict and action of the novel.

Out of the Desert is divided into 17 chapters/short stories, all but the first of which move from Todd’s childhood to the present time, beginning with the Mathieson’s arrival at “The Homestead.” In each story, Betsy Ashton employs a limited third person point of view to focus on one of Todd, Jimmy, Polly, Phyl, or Suzanne.

The novel succeeds on Ashton’s ability to create characters who are dynamic and capable of change, and through her capacity to create a rapid-fire series of episodes that draw the reader into this saga-like novel. The vivid descriptions of the high desert landscape with its vast areas of openness, its intense heat, its dry washes, and its animal life, some benign and some dangerous (rattlesnakes lurk almost everywhere), are well described, placing the reader effectively in the novel’s locale.

“Small lizards flitted about in the shady hole. Cricket would watch them for hours. Once when he crawled into the fort he found a scorpion. He whipped off a sneaker and squashed it before burying it in the pit.”

Ashton writes of what she knows. She spent several summers as a child living in a trailer near Victorville, where friends were scarce and one had to create things to do. Todd, who serves as the protagonist for most of the novel, is part embodiment of Ashton’s girlhood friend, Jerry Vail, who took his life as a preteen.

This type of novel could so easily lapse into sentimentality, but Ashton’s narrative does not. The realities of life are painfully present in her portrayal of Todd’s life.