Out of the Dark: An Orphan X Novel 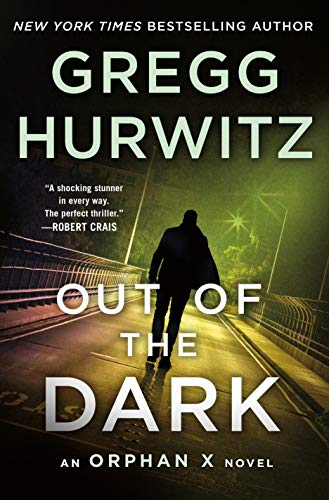 “Gregg Hurwitz has steadily blasted his way to the top of the thriller world, and Out of the Dark is a book you don’t dare lend to your friends, because you’ll never see it again.”

Someone has been trying to kill Evan Smoak.

Brought into an ultra-top-secret intelligence project as a young orphan, Evan was trained to carry out the most difficult black box operations imaginable. Known as Orphan X, he ultimately decided to go rogue, leaving the program to become The Nowhere Man, dedicating himself to helping those unable to help themselves.

However, someone at the highest level of government has decided to eradicate all traces of the Orphan Program, which means that every remaining operative must be eliminated. In the first three novels of the series, Evan carries out his missions as The Nowhere Man while simultaneously uncovering and destroying each link in the chain of command responsible for rolling up the program and attempting to kill him.

Now, in Out of the Dark, the fourth Orphan X thriller by Gregg Hurwitz, Evan Smoak has reached the ultimate link—the president of the United States. As an undersecretary of the Department of Defense, Jonathan Bennett sponsored the Orphan Program and used it for his own political benefit. Now, as president, he’s desperate to eliminate all traces of it.

The only problem with President Bennett’s plan is that Evan Smoak is unwilling to cooperate. Worse, he’s promised to kill Bennett just as he’s blown away each one of Bennett’s underlings in his relentless pursuit of payback.

Out of the Dark includes all the Orphan X conventions we’ve come to know and savor. Once again we’re invited inside the 7,000-square-foot fortress of solitude in Castle Heights Residential Tower with its secret vault behind the shower, the living wall of fresh herbs, and his Sub-Zero refrigerator stocked with incredibly expensive vodka. Downstairs, neighbor Mia Hall and her son Peter again offer Evan a glimpse of what normal life might be like. And Evan reaches out once more to a small network of allies that includes veteran armorer Tommy Stojack and young Joey Morales, introduced in the previous novel, Hellbent.

Hurwitz has moved the game to a different level, however, in pitting his hero against the president of the United States and members of the Secret Service sworn to protect him. This novel is more violent than the others, and the tension generated by Evan’s determination to liquidate Bennett has an edge to it that’s rather troublesome. After all, the good guy should have a line that will never be crossed, shouldn’t he? And assassinating a sitting president, no matter how much of a bad guy he is, should, well, be one of them, wouldn’t you think?

Nevertheless, Gregg Hurwitz has risen to the peak of his storytelling power in this one. The action is nonstop, with no time between skirmishes to catch your breath before the next one jerks you in.

What’s more, Hurwitz has gone out of his way to be creative in this regard. The inventive chase scene through Washington D.C.’s International Spy Museum mixes suspense and amusement as Evan tries to elude the Secret Service, and his tense meeting with Orphan V in the Rain Room of the Los Angeles County Museum of Art takes full advantage of the atmosphere of this “immersive environment.”

Additionally, his Nowhere Man assignment involving Trevon Gaines, a young autistic man whose family is wiped out by a drug lord, not only lays down an effective counterpoint to the main storyline but reminds us that beyond Evan’s emotional stiffness is a lingering capacity for compassion:

‘Just till I fall asleep?’

Gregg Hurwitz has steadily blasted his way to the top of the thriller world, and Out of the Dark is a book you don’t dare lend to your friends, because you’ll never see it again.

The Orphan X series is a definite winner, and readers won’t be able to wait to see what adventures await Evan Smoak in the next one.