Out of the Ashes: A Story of Recovery and Hope 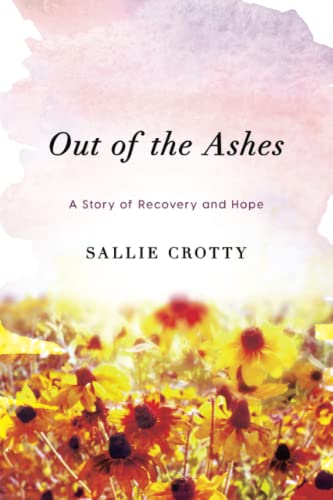 “‘My depression competed with my mania. Gloom and sluggishness strove to keep me stuck while agitation and flight of ideas propelled me to act.’”

Sallie Crotty’s first book-length work, the memoir Out of the Ashes, is a harrowing but ultimately hopeful account of her descent into mental illness. Such memoirs are not new. William Styron in Darkness Visible (1989), and later Kay Redfield Jamison in An Unquiet Mind (1995) recounted their experiences with bipolar disorder. What sets Crotty’s account apart is the thoroughness with which she documents her struggle to be properly diagnosed and then the painstaking process by which she was able to regain her health. She reveals how pernicious mental illness is, how the sufferer usually has no idea of what is happening to her, as well as the devastation mental illness can inflict on those around the sufferer.

When Crotty began to have episodes, she had no idea of what they were nor why she was experiencing them. Forty years old, she lived in Dallas, Texas, where she was a middle school English teacher, happily married, and the mother of a daughter and son.  Everything appeared completely normal. Then she began to experience manic attacks during which she lost her temper and began to hyper-function. These episodes were followed by long periods when she became unable to function at all. Eventually, panic attacks ensued, then ideations of suicide, and finally two failed attempts to take her life, first by ingesting poison and then by crashing her car.

Her doctors struggled to get a handle on what her exact problems were. She was prescribed many different medications, none of which proved effective, in part because she either refused to take them or because she did so sporadically, but also because no one knew exactly what a correct diagnosis was for her illness. Meanwhile, her husband Mark was trying to manage her and the children, along with his own job, baffled at what had become of his wife. In short, the lives of four people were in jeopardy.

Most helpful is Crotty’s detailed description of the treatment she eventually received at the Menninger Clinic in Houston after two previous hospitalizations. She presents a therapeutic model that has proven effective for many people. She has been in remission for 16 years but remains vigilant for any signs of a new onset. In her Afterword Crotty offers suggestions of ways for people to get help should they suspect that they or someone they love is showing signs of mental illness.

“The Crotty family experience is all too similar to what people deal with when a loved one is in the throes of mental illness, oftentimes complicated by alcohol and drug addictions. This writer can attest to how when one spirals through a bout of severe clinical depression (as I have done several times in my own life, first when I was forty-two), the toll it takes on everyone else is horrific. That my wife and five children were able to survive my episodes is miraculous. Like Sallie Crotty I was fortunate enough to find talented doctors who could help me and my family navigate a perilous journey.”

The author points out the stunning numbers provided by NAMI (National Alliance on Mental Illness): by 2020, only 46.2% of adults in the United States with a mental health condition received services. Just as bad, only 64.5% of adults with a serious mental illness were in treatment.

John Newlin is a staff reviewer at New York Journal of Books.