Ours to Share: Co-Existing in a Crowded World (Orca Footprints) 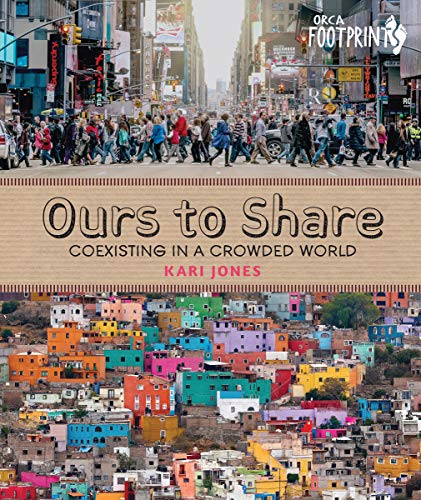 “Ours to Share encourages kids to be solution oriented, to participate in their communities as positive change agents, and to practice inclusivity as our population continues to expand.”

Ours to Share is intended to get kids thinking about our planet as a precious and sustainable resource instead of as the expendable commodity their parents and grandparents inhabited. Heartfelt intentions from Jones come through, and she obviously cares about the Earth. Her message encourages young generations to be conscientious and considerate, but above all, to get involved.

Jones raises some interesting concepts and asks some enriching questions. She challenges the assumption kids may have that our world must have always, from its very beginning, contained nearly eight billion people. Adults know this was not always the case. For kids, it is somewhat abstract that 12,000 years ago, there were roughly only one million people spread out across the continents.

Other interesting concepts for the middle grade reader include the migration of people from rural to urban living spaces, the sharing of homes with extended family members, the domestication of animals, and the compromise between animal habitats and human occupied land spaces for living, farming and manufacturing. The tendency for people is to behave as if the land is only a subject to their own use. Consequently, their decisions threaten the wildlife, water systems, and climate.

After pondering such ideas, Jones heads into a solution-oriented mode. Given that the situation the earth is in today was not always like this, and that humans have caused more harm than good, what can be done to reverse this trend? What responsibilities should our youngest generation take in fixing these problems? Her answer: Sharing. Co-existing.

Even though the kids did not necessarily cause any of the ailments facing our planet, it is for them to do something about it. Live a low environmental impact lifestyle. Fight for clean drinking water for all. Encourage wildlife restoration areas. Look around the community for people who need help, or locations that need cleaning up. Get involved in social justice initiatives. Create social justice initiatives. Be outspoken activists, standing up for wrongs needing to be righted.

Not to undermine the feel-good sentiment surrounding this book, after all, what she is proposing is not bad per se, but those looking for hard-based facts will be less inclined to grab on to Jones’ leadership example. She believes that we should take on her personal observations and leap into action alongside her and her family with equal verve and passion.

As early in the book as the introduction Jones makes a statement that a single-family house on her street was being razed to make way for three single family houses. Further down the street another home was being replaced by an entire apartment complex. She had begun to notice increased traffic, portable school buildings, and parks utilized at capacity. Even commenting on the perceived reduction of wildlife in her neighborhood. This is the Canadian version of over-crowding she bases the entire book on.

What is irksome is that this is pretty subjective. It would have been more impactful if Jones had then dug into the actual statistics regarding her community. What is the true population increase over the last 10 years? How many schools have added extra facility space? How much space has been added? What is the change in the various ratios that school districts track? How many other cities have experienced similar patterns in their public spaces? A vague sense of more crowds does not really invigorate high alert for problem solving quite the same as hard data.

When Jones does sneak in a factoid within the text or the pop-outs, she does not cite any of her sources. Her “Density Fact” graphics announce tidbits such as, “Experts predict that by 2030, 47 percent of people will be living in areas of high water stress.” Okay, but who are these experts? What is their statistical model? What percent of people live in such areas currently? Or, “The United Nations estimates that there are 2.1 billion people in the world today who lack access to clean drinking water.” At least we know this comes from the U.N. but where? How can we find out about those 2.1 billion people? The reader has no way of tracking these statements down for themselves.

Another soft aspect of the project stems from the selection of photographs, Jones’ primary graphic image tool. Here is one place where Jones was sure to dole out credit (although not precise) because with few exceptions, the photos come from open sources on the Internet: Shutterstock, iStock, Stocksy, Wikipedia, etc., which themselves are not primary sources and relying upon their accuracy is a controversial, prickly business which the kids’ own teachers debate, and in the end, disallow. Jones is in essence telling our kids that it is acceptable to formulate an argument and take action upon said argument based on a personal feeling that is not backed up by data and is supported by mostly secondary sources.

This is a pity, too, because so much of this data is available on the Internet. Her project could have catapulted from vague-personal-sentimental photo-montage scrapbook to hard-core evidence-based engaging-persuasive-argument with the tap-tapping of a few keyboard strokes and reputable citation. For our kids to even hope to be taken seriously by the community, it is that latter approach they need to invoke. Jones is asking, begging, them to enact deep widespread responsible changes, but only offering the tools to make a plastic water bottle bird feeder. Following her example will only get them so far either in academic settings or political arenas.

Taking a stab at the complexity of population growth, Ours to Share encourages kids to be solution oriented, to participate in their communities as positive change agents, and to practice inclusivity as our population continues to expand.