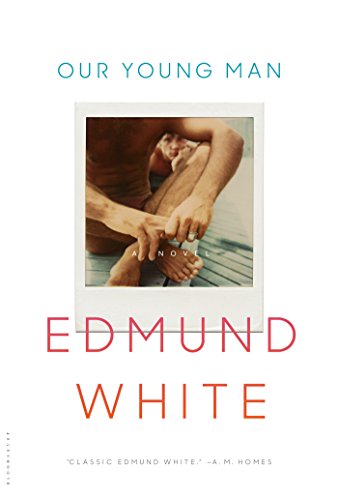 There is a wonderful creaminess in the writings of Edmund White. A smoothness, an opalescence. From his earliest novels (Nocturnes of the King of Naples, A Boy’s Own Story, and the exquisitely titled The Beautiful Room Is Empty), White has proven himself again and again to be one of the finest storytellers of his generation, and one of the most literate, an author who entices his readers with plots that come honey-drizzled in language to which the rest of us can only aspire.

White’s latest, Our Young Man, displays an author at his peak and fully in control of both the drizzle and the plotline, from the literary quote lodged at that point of no return just before the page gets turned and the book begins (It’s from Tolstoy’s Anna Karenina: “Then she remembered him, that he was there. All of him, with his hands, his eyes.”

The reference made by the title Our Young Man is explained immediately, in the book’s first sentence:

“Although Guy was thirty-five he was still working as a model, and certain of his more ironic and cultured friends called him, as the dying Proust had been called by Colette, ‘our young man.’”

And this is a sentence that says so much.

With it begins the story of a French male model named Guy (think ghee, like clarified butter, and not the sound given to the look-alike word for some dude walking down Fifth Avenue), who, as more than one character alludes to in the story, supposedly has a painting in the attic that is aging for him, so long does he stay youthful and therefore relevant all through the ’70s, ’80s and even the tip of the ’90s, thanks to his cute little ears, his slightly too big nose, and his perpetual mien of (minor) royalty in a world that mistakes vapidity for intelligence and treats beauty as an achievement.

And could any other topic have as fully ignited Edmund White’s prowess as a yarn-spinner, or so captivated his imagination?

If White’s writing has, in recent years, had a flaw, it would have been that in novels like Jack Holmes and His Friend and in his memoir Inside a Pearl: My Paris Years he had become a little staid in his literary workmanship; it as if a bit of oxygen had escaped from these works, making them seem sometimes burdensome, and leaving the reader occasionally gasping for air.

But in Our Young Man, a book that more or less obsessively considers the punishment of aging from the point of view of a character for whom growing older represents not only a loss of income, but also damage to his sense of self (nose and ear hairs loom large as harbingers of doom, and five pounds makes the difference between the continuance and the loss of a career), White seems to fully engage with himself as an author who is a vital and hungry as any who are attempting to make a name for themselves. As a leading man of letters, a man of rare intellect and a lifetime of achievements and awards (one is even named for him and is awarded annually to the author of the best first LGBT novel), White has nothing to prove. But here Edmund White writes as if everything were at stake.

Among those happening things are details worthy of Oscar Wilde.

Like this, a moment in which Guy sits in an outdoor café with his boyfriend, Andres, who is as darkly handsome as Guy is blond:

“Andres avoided sitting in a corner where there was a mirror behind him because he hoped Guy wouldn’t notice his bald spot or at least not dwell upon it. Guy understood the strategy.”

Or this, about robust young twins in a Greenwich Village gym:

“They were as much mirror images in their behavior, murmuring to each other, exchanging fractional nods of encouragement, one bending to tie the laces of the other, but everything unemphatic. They were like gods posing as shepherds.”

Or this, which explores the nature of female beauty:

“They didn’t say much. He’d never been able to draw her out. A woman like her didn’t need to talk. She was a beautiful catatonic—another selling point.”

Or finally this masterpiece, an aria cultural extolling life in Paris, embodied in designer Karl Langerfeld:

“Karl has decided accessories are important things. I saw him and a boy from his entourage at Le Palace, so chic, I danced with Jimmy Sommerville, and Roland Barthes wrote an essay about it before he was run over, poor dear, though he had the most extraordinary hair growing out of his nose! It must have been four inches long. He never recovered from his mother’s death. Anyway, Karl’s boy had on the most miraculous silver belt with interlocking eighteenth century heads complete with wigs, he said he got them off his andirons, you know he has that chateau now and lives as if he were in a Mozart opera. Karl himself I thought was carrying a purse, but, my dear, it was a book! Les Liaison Dangereuses, in a first edition. Oh, so chic, reading at a disco! And of course he had his fan and monocle and his hair in a ponytail, but he should lose weight.”

Throughout the book, our young man Guy does everything that you would suspect that a beautiful, gay, French male model would do in Paris, Milan, New York ,and Fire Island, to say nothing of myriad beaches of South America on which he models swimwear.

Our Young Man is sleek, witty, a bit raunchy, and fully enticing and entertaining. Throughout, White creates a world that many of us wish we could have lived through and many more of us are just as happy that we survived. And above all else Our Young Man is a book that makes the reader hope hope hope there will be many more like it from its author, who at age seventy-six is showing us all just what great writing’s all about. And who is making his reader’s suspect that he, too, has a certain portrait in the attic taking all of life’s hits for him.