Our Year in Love and Parties 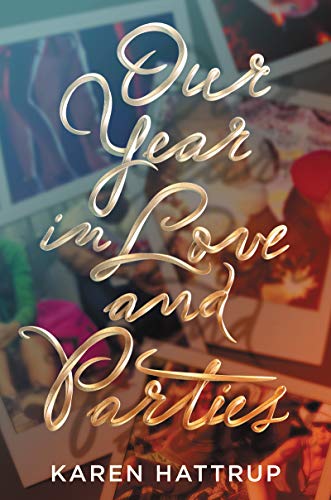 “the writing is smooth and the story compelling, making it a fun, quick read.”

“‘That is some A-plus vintage fashion.’
[Tucker] turned to see two girls, and it took him a second to realize that one of them was Erika. She’d had a pink bob before, so he’d been looking for that, but her hair was brown now, chopped very short in a way that showed off her blue eyes, her smooth skin. Freckles. He’d forgotten the freckles, but there they were. He could just barely see them in the dimness of the room.”

It’s almost the end of summer, and Tucker has just said good-bye to his girlfriend, who is leaving for the beach. No. Not his girlfriend. Just the girl he’d been having sex with. Right? Now he’s ready for senior year. But first, a party at the Fun Cave, where he worked when he was 15. The Cave, as they called it, was going out of business, and this would be the last night with the arcade games. The last night to really remember what it was like working there, when he got to hang around with that great older girl named Erika. And now here she was, teasing him about the Cave shirt he was wearing that was at least two sizes too small.

“Erika turned in time to see Tucker crashing down beside them. The girls both screamed and then pelted him with balls while he begged them to stop. He had his hands up to guard his face, and because of that stupid shirt, Erika could practically see his whole damn chest. It was pretty cute, a little fuzzy.”

The party at the Cave kickstarts two things: a renewed relationship between Tucker and Erika, even though she’s headed back to college, and a year in which they keep meeting up at parties. But that sounds too simple. Tucker is also dealing with his dad, a regular a-hole who barely remembers Tucker exists, but now wanted to eat lunch with him on a regular basis. And Erika is still living with the consequences of a huge mistake her senior year of high school, when a video leaked of her giving a blowjob to someone else’s boyfriend. Not exactly the kind of thing that makes people want to be your friend. At least she had Marissa during that dark time, and her mom. And she got to leave for college.

Now Erika is ready for her sophomore year, when she will be an RA on her dorm floor. Maybe things will get better. Tucker and his best friend Bobby will have a great senior year. Right? Before heading off to college themselves the next year. But what’s going on with Erika and Tucker? Are they friends? Are they a thing? How do they navigate the major issues they’re facing, between his dad and her past? Can they move on? And can they move on together?

Our Year in Love and Parties is a sweet and easy read, filled with plenty of characters to both like and root for. There is an emphasis on drinking and teenage sex—some of it odd—so depending on what you like in your romances you may find it uncomfortable. But the writing is smooth and the story compelling, making it a fun, quick read.