In Our Prime: How Older Women Are Reinventing the Road Ahead 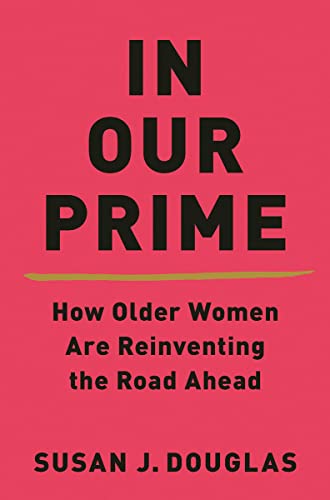 Susan J. Douglas’ In Our Prime is a call to arms against “gendered ageism” promoted by the media, by economic fundamentalism, and by the divisions between younger feminists such as the #MeToo generation, and those of “a certain age.” As a baby boomer she places herself firmly in the latter category, without actually confiding her birth-date. She makes the case that “our culture seems intent on trying to rope women of my vintage off into a honey-hued, quiet, quilted preserve, where we are as relevant (and as stimulating) as pet rocks.”

This assertion is somewhat undermined in terms of impact by her very detailed and entertaining chapters on media and marketing treatment of “aspirational ageing,” starring Helen Mirren, Diane Keaton, Jane Fonda, Meryl Streep, Susan Sarandon, Judi Dench, et al. Helen Mirren is a particular favourite, and pops up in almost every chapter, more than once asserting despite being ambassador for L’Oreal: “I know when I put on my moisturizer, it probably does fuck all, but it just makes me feel better.” Many women can relate to that.

Douglas acknowledges of course that while these celebrities, and some famous media productions such as the long-running, stereotype-defying NBC television show Golden Girls (1985–92), have helped to rewrite the script on what older women are interested in (fashion, cosmetics, sex) and capable of (politics, high-powered jobs, sex), aspirational ageing “with its class and racial biases about who deserves the spotlight, and who doesn’t and its insistence on personal responsibility” excludes a lot of women of all ages.

Her penultimate chapter, The War on Older Women, illustrates very persuasively that “neoconservatism, the avid belief in the free market, is not only sexist, it is also ageist and racist.” Douglas shows clearly that older women after a life-time of the gender pay-gap in the workplace, and the lion’s share of unpaid family care at home, are much more financially vulnerable. On top of which, they live longer and are less likely to remarry than are older men, so they are more likely to be living alone. “Older Women are 80 per cent more likely to wind up in poverty than men, with women of colour having the highest poverty rates.”

Douglas sees the revival of “that suffocated notion of collective responsibility, or what we used to think of as the common good” as a solution to this problem, and “lifespan feminism” as a powerful strategy for achieving this goal. She pleads for more collaboration, and less mutual negative stereotyping between baby boomer and later generations of feminists, in order to combat gendered ageism, to which all non-celebritywomen will eventually be subject unless there is serious social change.

“By advocating for lifespan feminism, the issues facing older women become a natural extension of the ongoing feminist fight for equity, fairness and justice.” She urges all women to call out gendered ageism wherever they find it, most obviously of course in media and marketing; and also introduces some more analytical approaches such as “gender-responsive budgeting” (not usually much discussed outside international development circles); and urges women to argue more from facts and numbers to counter “biased mansplaining.”

In Our Prime is readable and persuasive, though the earlier glamorous chapters on aspirational ageing read as a bit too aspirational in fact, unwittingly casting some shade over Douglas’ later economic analysis, and recommendations for lifespan feminism, despite her attempts to redress this effect. It would have been interesting also to have more reflection as to what she expects of men, of all ages. The scenario Douglas paints is still one where women are doing all the equality heavy lifting.

As not all women are feminists, progress toward gender equality requires, statistically and otherwise, that not all feminists are women.