Our Necessary Shadow: The Nature and Meaning of Psychiatry 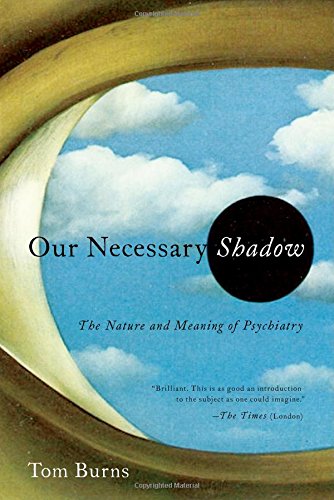 “There are very few books that cover the field of psychiatry in all its complexities and do so in a clear and easily read format. Tom Burns’ Our Necessary Shadow is one of these few.”

Our Necessary Shadow is an excellent read.

There are very few books that cover the field of psychiatry in all its complexities and do so in a clear and easily read format. Tom Burns’ Our Necessary Shadow is one of these few.

The vast majority of psychology books suffer from one or more fatal flaws. Some are erudite but difficult to read. Others are overly simplistic and miss the complexity and richness of their subject. Some focus on one particular disease entity. “Anti-psychiatry” books are an attempt to discredit the mental health field altogether. Many books attempt to advocate one treatment, medication or modality, often with a bias. Our Necessary Shadow is the exception to all of these flaws.

As the author states, the book’s chapters can be read in any sequence since each chapter is a self-contained topic. The first of three sections is an introduction to the contents and “What to expect if you are referred to a psychiatrist.” This first section, which comprises 75 pages and is easily read in less than 90 minutes, is a gem within a jewel box. This should be mandatory reading for anyone interested in obtaining psychiatric help or having a family member who will do so, but also for the most experienced psychiatric practitioner who will find the section extremely useful. Even if one chose not to read another page, this section would be well worth buying the book.

Part One—chapters 2–7—is a rich and detailed history of psychiatry as it has developed and evolved. Mental health history starts with custodial institutionalization into “Insane Asylums “as an attempt to isolate mentally Ill individuals from the rest of the population. In the first half of the 20th century, the emergence of Charcot, Jung, and Freud brought the “Unconscious Mind” to the forefront as a major force in the rise of the psychoanalytic theory of mind and mental disorders. This theoretical framework rose rapidly and along with it, the practice of psychoanalysis. Both fell into the background however, as psychoanalytic treatment was shown to have overpromised on its ability to solve many mental problems.

Then the so-called “medical model” of mental illness began to emerge between the two great world wars. Psychiatry was accepted into the field of medical specialties, albeit tentatively and with great reservation on the part of other physicians.

With the explosion of mental health medications in the 1960s, 70s and 80s, many patients could be treated in a profoundly effective, and in some cases a lifesaving manner with these medications. The author suggests that it is this success that emphasized the concept that all mental illnesses are biological in nature and that physical treatments could be found for virtually any condition with sufficient time and research. The text strongly maintains that this has been an insufficient assessment of the mind and the cause of mental illnesses as the biological bandwagon became more prevalent.

Part Two “Questions Psychiatry asks about us and the Questions we ask of it” contains six chapters, each of which discusses a fundamental controversy regarding mental illnesses and the treatment provided by  practitioners. A strength of Dr. Burns’ approach is that the material is presented in an unbiased fashion so that readers can assess the reality of a situation for themselves.

The question of whether or not mental illness is real. And is psychiatry a legitimate medical specialty?

The issue of whether psychiatry is trustworthy. The author describes not only the benefits and successes of the field, but openly confronts the “sins and abuses” of practitioners and at times totalitarian governments who have misused psychiatric treatments.

The third chapter tackles the issue of whether problematic and criminal behavior can be effectively evaluated and treated at all by mental health practitioners, either in the courts or the office.

The text then confronts the possibility that psychiatry has “medicalized” everyday life and given a diagnosis to many normal expectable issues of our human existence. As the number of acceptable diagnoses has ballooned from 106 in 1952 to 297 today, it is estimated that 46% of Americans will have at least one of these disorders in their lifetime. Is it legitimate to diagnose “Internet Gaming Disorder” as a mental illness? “Excessive caffeine intake”? Persistent irritability with temper tantrums”?

Lastly, the author covers topics such as treatment against one’s will, the genetic future of psychiatry, and the rise of neuroscience with the diminution of the balanced “Bio-psycho-social” model. Is all of mental illness a “brain disease”? Even when it is possible to see a strong biological and hereditary components, Dr. Burns points out that each patient is an individual with strong variations in family history and exposure to life events. He correctly supports the idea that the Nature vs. Nurture Controversy remains alive, well, and as yet entangled in the 21st century.

This assessment finds few criticisms of the text. The only one that deserves mention is the title. It might be expected that the title is somewhat mysterious to most readers. Until one has read the entire introduction and reaches the last paragraph, it is not explained. Only then the reader understands that the author sees psychiatry as “our necessary shadow.” It is always with us, and like a shadow, it takes its form from us. Also like a shadow however, it is distorted and shifting. We cannot escape the problems of mental health and illness any more than we run away from our own shadow.

We may not always like what we see of ourselves as reflected in psychiatry; but it is real. It is us. With this explanation, the title makes sense and is memorable. A book this good should have a catchier title that not only explains its content but also draws the reader to purchase and read it. Confronted with the plethora of mental health books to choose from, I think this title unfortunately does not do that and may lose readership because of it.

Overall, I find Our Necessary Shadow one of the best books on psychiatry and mental health that has been written. It is easily readable, very informative, and a boon to our people and culture.